The Crusader Sea Castle at Sidon 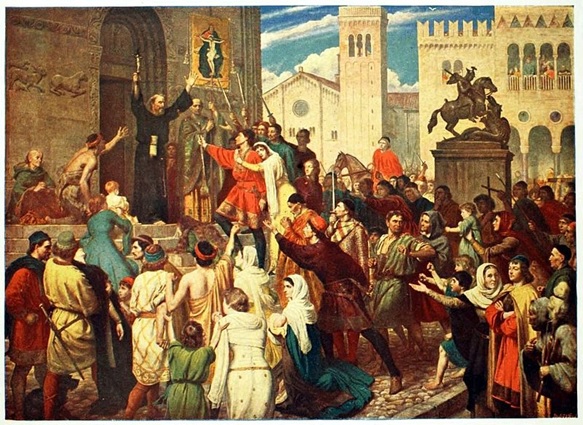 Depiction of Peter the Hermit preaching to the First Crusaders [22] 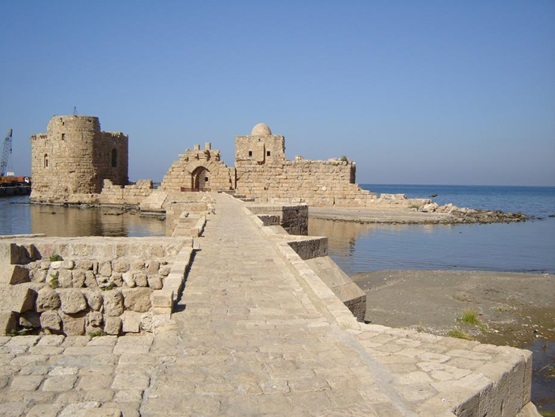 The crusades were a series of invasions of the Middle East launched by European Christians in an attempt to gain control of territories considered sacred in their religion. Christianity had roots in the region, being one of the Abrahamic religions developed from Judaism around the start of the first millennium AD [1]. The region has remained a Roman province until 391, when the Eastern Half of the Roman Empire split into the Byzantine Empire. The Levant remained within the Byzantine Empire until they were defeated by the Arab Rashidun Caliphate [2]. The Byzantine Empire still held territories further north in what is present-day Turkey, Greece, and the Caucuses. For the next several hundred years, the Levant region was ruled by a series of Arab, Persian, and Turkic rulers. In the 11th century, the Turkic Seljuk Empire invaded Byzantine territory in Anatolia, and took control of coastal regions of the Levant [3]. This encroachment into the remaining parts of the Byzantine Empire has often been seen as the primary driver of the first crusade.

In response to the Seljuk invasion of Anatolia, Pope Urban II took efforts to support the Byzantine Empire and to regain lands in a speech at the Council of Clermont [4]. This may also have been driven in part by a desire to maintain access to holy sites which were seen as threatened by these invaders.

In 1096, the first the People’s Crusade, which appears to have been largely a popular or peasant crusade, marched towards Jerusalem but were quickly defeated by the Seljuks. This was followed by a more organised crusades in the same year, which was more successful in defeating Seljuk territory [5]. Throughout the next several years these crusaders took territory along the eastern coast of the Mediterranean, reaching Jerusalem by 1099. There they established the Kingdom of Jerusalem, which covered territories that cover of much of what is modern-day Israel [6]. Other small kingdoms established by these crusaders included the Principality of Antioch, and the counties of Tripoli and Edessa.

These states remained relatively stable for the next 40 years, but with many of the original crusaders returning to Europe after the early years of invasion, these territories became vulnerable to attack. The County of Edessa fell to Turkish Zengids invasion in 1147, and prompted the start of the Second Crusade, which involved a number of Christian defeats to the Ayyubid sultan Saladin [7]. The launch of the Third Crusade was an attempt to regain territories around Jerusalem, which was partially successful but did not involve the capture of the city itself. Treaties were established with Saladin to allow access of Christians to Jerusalem in exchange for ceded lands [8].

Over the next 100 years, multiple crusades were launched to try to stabilised the crusaders states, which ultimately failed [9]. Investment in further military conquest had declined due to changing attitudes within Christian Europe and this coupled with increasing strength of Muslim states in the east meant that by the end of the 13th century, these states had all collapsed.

The nine individuals in this sample came from an archaeological site in the city of Sidon, in present-day Lebanon. They were carbon-dated to between 1025 and 1283 AD [10]. The castle at Sidon was a major fortification that was built around the 11th century on a small island opposite the present-day city [11]. The location had been a major port since the Bronze Age and was also used by the Phoenicians. The individuals were buried in a pit in a disorganised fashion. Some of the body parts had been detached before burials, but others had not. Frankish buckles were found in the pit and were consistent with European invaders. It seems likely that these individuals died in some sort of violent event, such as a battle, due to injuries evident on their skeletons [10].

Genetic analysis has shown that these individuals were mixed between Europeans and local inhabitants. It is thought that this mixing is related to crusaders recruiting the local population and eventually intermarrying with them. Despite this intermixing, there appears to be very little evidence for any longer-term genetic legacy of these Europeans in the region today [10].

The mitochondrial haplogroups of these individuals was a mixture of J, H, U, and T. All of these haplogroups are common to the Middle East and Europe, which is partly a legacy of earlier migrations into Europe by middle Eastern farmers some 9,000 years ago, as well as further migrations from the Caucuses region [12-14]. All of these individuals were male and their Y chromosomes came from a diverse range of lineages, including E, R, T, J, and Q. Haplogroups J and R are common in Europe today and are associated with migrations into Europe from the Caucuses Region in the Bronze Age [15-17]. Haplogroup E is common in North Africa and is found in the Middle East but rarely in Europe [18-19]. Haplogroup T is found among Anatolians and other Middle Eastern peoples [20]. Lastly, haplogroup Q links to the Altai mountains and is found in Turks and Native Americans [21], suggesting another local link. These haplogroups are consistent with intermixing with Europeans, with both local and European male lineages present.