The Distribution of Iberomaurusian Sites [17] 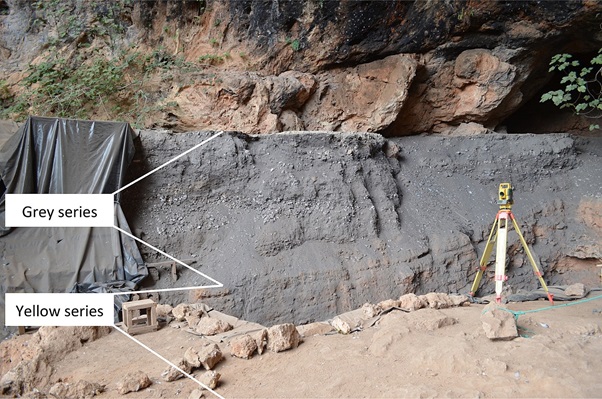 Excavations at the Taforalt Site [18]

The Epipaleolithic in Morocco:

While the end of the ice age is often viewed as the main transition to the climate we have today, in the Sahara region, the climate continued to change for a further several millennia. The retreating ice brought green conditions to the area and as late as 8,000 years ago, the Sahara region was much wetter than it is today [1-2]. These climate fluctuations have had a major impact on the people that have lived in and around the region.

The Epipaleolithic period that proceeded the end of the ice age starting around 15,000 years ago was a particularly wet phase in which hunter-gatherer groups moved into the area. Resources may have been rich enough to have even promoted sedentary living, with middens of land snails suggesting that people lived in the same place for much of the year [3]. These middens have become known as ‘escargotières’ [4]. The particular culture of the area during this period is known as the Iberomaurusian [5], which has also been found in Southern Spain.

These people mostly lived near coastal areas, with most evidence for their way of life found cave sites and rock shelters [6]. Flint and bone tools were often found at these sites, as well as large amounts of as [4].

The nine individuals from this site were found in a cave called Grotte des Pigeons, or Taforalt, which is located 6 miles (10 kilometers) from the town of El Aioun, in present-day Morocco. These individuals have been carbon-dated to between 15,007 to 13,908 years old [7].

The site provided clear evidence of the diet of its inhabitants, with large volumes of land snails and ash deposits found at the site [8]. Animal bones were also found, as well as shell beads [9]. There is evidence that both oak trees and various species of pine grew in the area at the time [9]. Dental modifications showed that grooves and chips were deliberately made in teeth [10].

It has been questioned whether the people that inhabited the Mahgreb and Capsian region during the Epipaleolithic were related to later groups such as the Berbers and present-day peoples of the region. Prior to the use of ancient DNA, dental analysis had indicated that there is some continuity between these peoples [11]. Recent genetic analysis of the Taforalt individuals has shown that they are most closely related to peoples from the Levant, with about a third of their ancestry coming from sub-Saharan Africa [7]. They were only partially related to present-day populations with more connections to the middle east than present day populations, suggesting that there has been further migration into the area since the Epipaleolithic. There was also no evidence of European gene flow, despite the Iberomaurusian culture appearing on both sides of the Gibraltar Straits.

Six individuals belonged to the U6a mitochondrial haplogroup, while one belonged to M1b. The mitochondrial U lineage was the most common haplogroup among European and West Asian hunter-gatherers of the Anatolian region [12], with the U6 branch particularly linked to West Asia. The M lineage is one of the more ancient mitochondrial lineages which is related to N and has deep Paleolithic origins. It is found in Asia today, but is mostly absent in Europe [13-14]. Both lineages are consistent with a Levantine connection.

The only Y chromosome haplogroup found in this sample was E1b1b, which is primarily found within Africa today. Its origins are either African or West Asian [15-16].