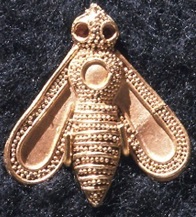 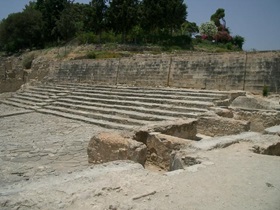 The remains of the Phaistos Palace [12]

The Minoan Culture was a Bronze Age civilization on the island of Crete and surrounding islands [6]. It is believed to have been the first advanced civilization of Europe, established in the Early Bronze Age [7].

Although the writing of the culture (Linear A) has yet to be deciphered, we can infer much of their way of life from images and objects. For instance, all jewellery seems to be associated with females, and only with elites. Jewellery may have had an important role in rituals and may have been symbols of rites of passage. All of this taken together suggests that Minoan jewellery may have played an active role in linking elite females to the divine [8].

The disappearance of the culture has been debated for centuries. One possible explanation is that a tsunami generated by a volcanic eruption caused so much damage to the agriculture and fishing that the Minoans were doomed. However, modelling suggests that the tsunami would not have been damaging enough to completely wipe out the civilization. It is possible that the tsunami alongside the other consequences of the eruption – ash fall, earthquakes, pumice drifts – could have finished off the culture [6].

The Individuals of Moni Odigitria:

The site of Moni Odigitria is a cemetery, close to the Monastery of Odigitria. The site consists of two tholos tombs (Tholos A and Tholos B), also known as beehive tombs, which is a burial structure in the shape of a dome, but which is not a true dome – it is made to look this way with the use of successively smaller rings of stones. A rectangular building, including an ossuary (a pit in which the bones of dead people are places), was attached to the east side of Tholos B, and a courtyard was in front of the entrance to Tholos A. The ossuary was packed full of the bones of fifty- to fifty-five individuals, as well as over 2,000 sherds and twenty-three seals, with almost no soil. It is believed that the ossuary was filled in a single event, probably from bodies first buried in Tholos B [10].

The site was close to an ancient Minoan city, known as Phaistos. The city, which covered of three hills in an east-west line, was destroyed by the nearby town of Gorthina roughly 2,200 years ago. The city had a Minoan palace, built by the Mycenaean peoples [11].