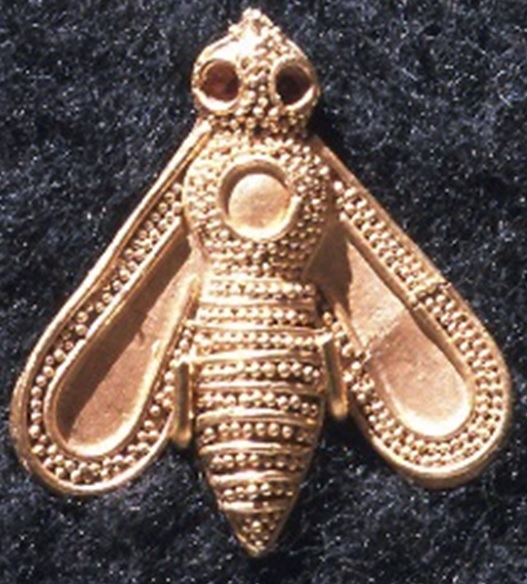 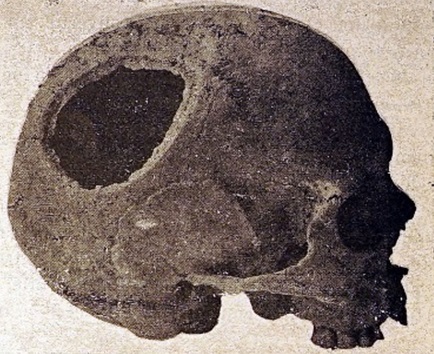 An example of a trepanation [15]

The Minoan Culture was a Bronze Age civilization on the island of Crete and surrounding islands [6]. It is believed to have been the first advanced civilization of Europe, established in the Early Bronze Age [7].

Although the writing of the culture (Linear A) has yet to be deciphered, we can infer much of their way of life from images and objects. For instance, all jewellery seems to be associated with females, and only with elites. Jewellery may have had an important role in rituals and may have been symbols of rites of passage. All of this taken together suggests that Minoan jewellery may have played an active role in linking elite females to the divine [8].

The disappearance of the culture has been debated for centuries. One possible explanation is that a tsunami generated by a volcanic eruption caused so much damage to the agriculture and fishing that the Minoans were doomed. However, modelling suggests that the tsunami would not have been damaging enough to completely wipe out the civilization. It is possible that the tsunami alongside the other consequences of the eruption – ash fall, earthquakes, pumice drifts – could have finished off the culture [6].

The Individuals of Hagios Charalambos Cave:

The site of Hagios Charalambos Cave, also known as Gerontomouri Cave, is a natural cavern. The cave was used for secondary burials, meaning that bodies were transported there after being buried in their original grave. It is believed that there are almost four hundred burials in the cave. The cool temperature of the cave preserved the remains, almost like a natural freezer. Some of the grave goods were also transported there, including pottery, figurines, seals, stone tools, metal tools and weapons, jewelry, and other funerary gifts [10]. It is possible that a cave one kilometer away could have been the location of the primary burials, but the cave (known as Psychro Cave) is one of the possible birth places of Zeus, so the bodies may have been needed to be moved to purify the place as it became a focus of worship [11]. Stones of a different geological context to the rest of the cave suggest that tombs may once have been built in the caves, although none of them remain [10].

Some of the skulls showed evidence of trepanations [10], a form of surgery to remove a circle of tissue of bone. Trepanation is the oldest documented surgical procedure [12]. It is believed that this could have been practiced for medical, or symbolic/ ritualistic reasons, perhaps after death [13]. Some believe that it may have been an attempt at controlling behavior [14].

Four of the individuals in this sample belonged to mitochondrial haplogroup H, which is commonly found in Europe today and is known to have Middle Eastern origins. It has been found in Mesolithic hunter-gatherers, and existed in Europe prior to the arrival of agriculture [16]. The final individual belonged to the mitochondrial haplogroup U, which was the most common haplogroup among European hunter-gatherers of the Paleolithic and still exists in Europe today although at lower frequencies due to the genetic contribution of incoming European farmers [17]. Both males in this sample belonged to the Y-chromosomal haplogroup J, which is common in Europe today and was probably brought there by Neolithic agriculturalists [18].