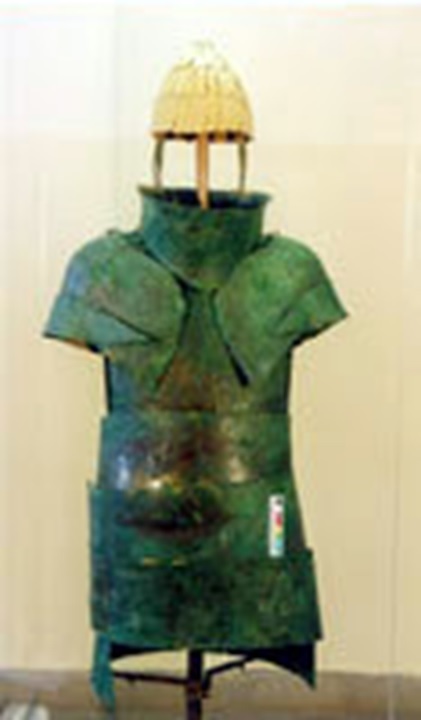 An example of Mycenaean armour [9].

The Mycenaean Culture was a Bronze Age Culture in present-day Greece [6]. It is believed that this was one of the first advanced cultures in Greece, with its social organisation, works of art and even a writing system. The Late Bronze Age in Greece was a time of change, with two main developments – firstly, societies transformed from egalitarian and kin-based to competitive and ranked; secondly, they became increasingly involved in widescale networks of alliances and exchange. On outcome of these changes was the development of different funerary practices. Graves went from being generally solitary and unfurnished to being large, in formal cemeteries with rich grave goods. It is believed that graves were assigned and decorated according to status. Whereas most graves belonging to women and children were undecorated, a man’s grave (and therefore their status) was decided upon according to their participation in gift networks and success in hunting expeditions and fighting [7].

Warriors engaged in combat are characteristic images of Late Bronze Age Greece, and in particular the Mycenaean Culture. This, alongside grave good evidence (elite males were often presented as warriors in their graves), suggests that a death in battle was not seen as a disgrace but was in fact celebrated. Furthermore, the images appear to celebrate not only skill in warfare for the victor, but also for the defeated, suggesting that a death in battle was still celebrated even in the case of the loser [6].

Evidence from Linear B (the script used for writing Mycenaean Greek) tablets suggests that both girls and boys stayed with their mothers until they reached a certain age, at which point boys went off with their fathers to learn their profession. Some clay tablets seem to have been used by children aged eight to twelve years – perhaps these were sons of scribes, employed as apprentices [8].

Ritual was important to the Mycenaean peoples. Some evidence suggests that children played an important role in these rituals, perhaps as assistants to the priest. Young girls especially seem to have been important and may have had to spend several years in service of a young goddess, as they are sometimes depicted wearing clothes similar performing similar acts of offering to a goddess as priestesses [8].

The Individuals of Ayia Kyriaki, Armenoi, Peristeria, and Galatas Apatheia:

The site of Ayia Kyriaki consists of nine Mycenaean tombs, forming a large tomb cemetery. The individual in this sample found at this site was a female, found in a secondary burial, meaning that her bones (and some grave goods) had been moved from where she was originally buried. At this site grave goods including jewelry and some bronze object were found, which suggests that the individuals in this tomb may have been wealthy (although the absence of any prestige grave offering suggests they were not the ruling elite) [9].

The site of Armenoi is the only intact necropolis (a large tomb cemetery with elaborate monuments) of this time. Two-hundred-and-thirty-two chambers have been identified at this site, containing one thousand individuals. A vast abundance of artefacts have been found in the tombs, including over eight hundred decorated and seven hundred undecorated vases, and three hundred and fifty bronze items. Interesting finds include a jar with Linear B inscription, a boar tooth helmet, and a reed basket decorated with bronze nails. The individual in this sample found at this site was an adult female [9].

The final site of Galatas Apatheia consists of seven rock-cut tombs. Due to the lack of grave goods, these were most likely the tombs of ordinary people. The two individuals in this sample from this site were found in a chamber with an unusually large number of people in. One of the individuals was buried in a pit dug out in the chamber floor, on his back with his legs extended. Two dogs were also buried in the tomb [9], which in Mycenaean Culture often means that one of the individuals was most likely a distinguished hunter [10]. Dental analysis of the individuals at this site revealed that the population ate coarse food or used their teeth for holding and cutting string in fishing and sailing [11].

The site of Peristeria was a tomb that contained a large number of bronze objects and pottery. It was thought to have been a display of the increasing wealth of the region during this time [12]. It was different from a typical tomb of the period, in that it was free-standing and is not considered a tholos tomb, which typified the period.

Genetic analysis of the individuals in this sample revealed that the Bronze Age Minoan (from Crete) and Mycenaean (from mainland Greece) cultures were genetically similar, with most of their ancestry coming from early Anatolian (Turkish) Neolithic farmers, and the rest from Caucasus and Iran. The Mycenaean individuals, including those in this sample, also had ancestry from eastern European hunter-gatherers. Modern day Greeks are genetically similar to Mycenaeans [9].