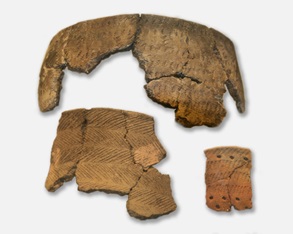 An Example of Comb Ware Pottery [18]

The Comb Ware Culture of Estonia:

The adoption of farming in the Eastern Baltic was a far more gradual process than in the rest of Europe. Owing to long harsh winters and short summers, hunting and gathering persisted with only small-scale adoption of domesticated plants and animals [9-12]. Many of the late hunter-gatherer societies developed sophisticated fishing and hunting technology, being heavily reliant on marine and forest resources. The last peoples that still practiced this mixed lifestyle of farming and gathering were the Narva, who by 5,000 years ago had become the dominant culture of the region at a time when farming was firmly entrenched in the rest of Europe.

The transition to farming is associated with two ceramic cultures that followed in succession, these being the Comb Ware Culture and the Corded Ware Culture. The Comb Ware Culture was widespread across northern Eurasia, with find of similar ceramics occurring over a vast territory stretching into Eastern Siberia [9]. It is thought that the Narva people, who were descended from Mesolithic hunter-gatherers adopted this culture during their slow transition to farming. By contrast, the later Comb Ware Culture was brought by Indo-Europeans arriving from the Southeastern Europe [10-11]. Comb Ware ceramics were made by using comb-shaped objects to incise alternating patterns on the surfaces of clay pots before firing.

The four individuals in this sample came from three Comb Ware sites located in different areas of present-day Estonia. Hirmuste is located 45 kilometres (28 miles) east of the town of Kärdla on the island of Hiiumaa, while Kudrukula is 15 kilometres (9 miles) from the city of Narva, and Tamula is 68 kilometers (42 miles) south of the city of Tartu. These sites constitute burial grounds, with small numbers of individuals, although Tamula had more than 30 individuals present [12]. The individuals in our sample were buried with grave good such as animal bone pendants. Finds of pottery at these sites linked them to the Comb Ceramic Culture. All individuals were carbon-dated to between 5,800 and 7,386 years old.

Genetic analysis has shown that these individuals were the direct descendants of Mesolithic hunter-gatherers and contrasted sharply with later Comb Ware peoples that moved into the area starting around 4,500 years ago [13-14]. The continuity of Mesolithic genes can be seen in their mitochondrial haplogroups. All individuals apart from one that could not be sequenced belonged to the U lineage, which was the most common haplogroup among European hunter-gatherers of the Paleolithic and still exists in Europe today although at lower frequencies due to the genetic contribution of incoming European farmers [15]. One of the males in this sample belonged to Y chromosome haplogroup R1a, which has recently origins of around 5,800 years and is associated with the spread of Indo-European languages and Steppe peoples. It is common in Eastern and Central Europe today [16-17]. The other could only be determined as belonging to R1, which means it is not possible to assess which specific version of R1 this individual belonged to.