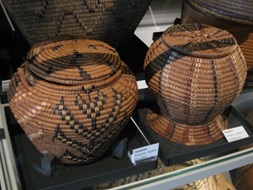 Cast of the Kennewick Man Skull [20]

To the east of the coastal mountains in an area spanning form Washington State (United States) into British Columbia (Canada), there were multiple Native American tribes that have inhabited the region for millennia. Often collectively known as the Plateau Native Americans [7], they today consist of the tribes such as the Interior Salish, the Chinook, and the Sahaptin peoples. While there are limited archaeological materials that cover the full extent of the past 10,000 years, there is evidence to suggest that these people lived a hunter-gatherer way of life for thousands of years.

Native American tribes from this region were often engaged in complex trade networks and often shared similar language [7]. It is believed they used root foods as a major part of their diet [8], and evidence suggests that pit cooking was common as far back as 2,500 years ago [9]. They were also known for the complex basket making, which has been found to have been practiced for at least 2,000 years [10]. Salmon harvesting from inland rivers was also common in areas such as the Columbia Basin.


The controversy over Kennewick Man:

The sample in this story was discovered on the banks of the Columbia River in 1996 near the town of Kennewick, in Washington State, United States, and was a nearly complete skeleton of a man carbon-dated to between 8,340–9,200 years old. It was initially though that some artifacts near the skeleton belonged to him, but these were later shown to be more modern [11]. Dubbed Kennewick Man, this skeleton created a major stir within the archaeological community when initial analyses of his cranium showed that he had some features unlike contemporary Native Americans [12]. A legal battle ensued for possession of his remains, as local Native American tribes wished to have his remains returned for reburial [13]. In 2004, a complete analysis of his skeletal morphology concluded that he was not related to the local tribes and suggested he may be more closely-related to Polynesians and Ainu populations [12,14], in addition to having some European-like features.

These early findings were entirely based on analysis of skeletal morphology, and only relatively recently have genetic data been available. In 2015, a DNA tests showed that Kennewick Man was much more closely-related to Native Americans than Polynesians or Ainu, and was particularly close to the Confederated Tribes of the Colville Reservation, which are local to the area [11].