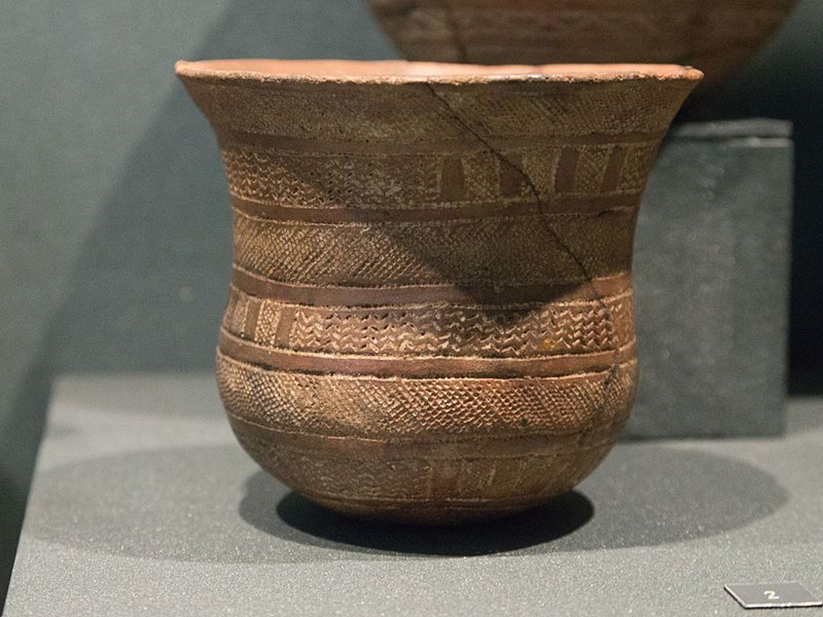 Example of a Bell Beaker Vessel [14]

The Bell Beaker Culture of The Netherlands:

The Bell Beaker Culture was a Bronze and Copper Age culture that existed in areas scattered across Central and Western Europe, including present-day Britain, France, Spain, Portugal and Germany. It was strongly associated with the Corded Ware Cultures that appeared around the same time and in the same regions [6]. The Bell Beaker culture is typically identified by the presence of characteristic bell-shaped decorated pottery, but certain other materials are also often associated with people from this culture, including arrowheads, copper daggers, and v-perforated buttons [7].

The appearance of the Bell Beaker and Corded Ware Cultures of Europe have proven to be enigmatic in the history of the continent. Both were remarkably uniform cultures that spread quickly across broad swathes of the continent, with evidence that the Corded Ware peoples migrated from the east, although there has been much debate of where these cultures came from. They are now considered to have originated in the Pontic Steppe region of what is now Ukraine and Russia, between the Caspian and Black Seas [10,11], however some authors argue that the Bell Beaker culture originated near an estuary of the river Tagus, of the Iberian Peninsula [12]. The people that are believed to be source of the Corded Ware Culture were the Yamnaya, a named derived from the Russian for the pit burials that were found in present-day Ukraine and Russia [13].

Bell beakers were probably primarily intended for rituals, perhaps in ceremonies involving a transformation [15]. Archaeologists once proposed that they represented a male-drinking tradition [16], but current research suggests this may not be accurate. Whilst some beakers were used to hold beer and mead, others were used to smelt copper ores, and some used to store food [15]. The beakers were made of local material, so their distribution could demonstrate small changes population changes, such as the movement of marriage partners [17]. Whatever the use of these vessels, they were clearly significant to the culture and are often found at burial sites.

The Individuals from De Tuithoorn:

All the individuals in this sample were found at the site of Oostwoud-Tuithoorn, in present-day The Netherlands. The individuals in this sample were carbon dated to between 3,697 and 4,579 years old [18]. The site consists of two burial mounds of clay sediments, making for excellent preservation of the individuals. At one point, a line of pits likely connected the two mounds. The use of mounds and pits suggests that this was a permanent settlement. The burial mounds were probably used for several generations by a local group [18]. If they did not live in the immediate area, it is likely they lived nearby [19]. There is abundant evidence of Late Corded Ware settlements, but few associated Bell Beaker pottery remains. Three of the males in this sample were second- or third- degree relatives. The land was probably once converted to arable land. All female individuals were buried on their right side, facing west or north. All male individuals were buried on their left side, facing south. Both males and females were buried in a crouched position typical of Beaker burials. Although some Bell Beaker sherds were found in the surrounding area, with typical Bell Beaker decorative motives [19], no burial gifts were identified [18].