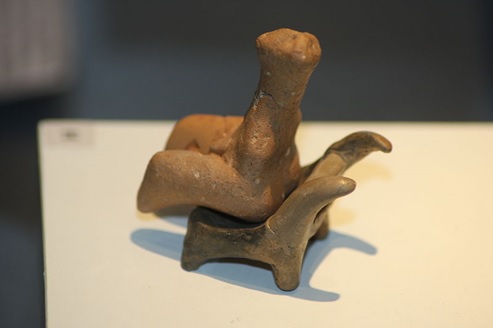 Stone figurine from the Romanian Neolithic of sitting individual [17]

The first major discoveries of the Starčevo Culture were made in the 1930s along the banks of the Danube near the town of Starčevo, from which the culture gets its name [12]. The site had multiple round dugouts that were likely the foundations of buildings. Within them stone masonry was discovered, as well as artifacts such as beads and weapons. Burials were also found at the site with bodies in a crouched position. The Starčevo culture extended through a large area including the Balkans and present-day Greece and west to the Black Sea.

The site of Măgura Buduiasca is located on the Teleorman River near the town of Alexandria in present-day Romania [14]. The site was inhabited from the Early to the Late Neolithic. The individual in this sample was carbon dated to between 6,064 to 5,746 years old, placing them in the Early Neolithic Starčevo period. The site had evidence of pits and pit-huts as well as hearths. Agricultural tools such as grinding stones were also found in addition to stone tools and bone ornaments and figurines [14-15].

There were two remarkable discoveries in the genetic analysis of this individual. The first was that they, like many other samples from the region, were the direct descendants of Mesolithic hunter-gatherers despite being farmers. This contrasts with the pattern in other regions, particularly in Western Europe where there was more wholescale population replacement after the arrival of agriculture [14]. The second interesting feature of this particular individual is that they were found to be equally related to both Eastern and Western Hunter-Gatherers. Most other ancient DNA samples in the region extending into present-day Ukraine and Russia are nearly 100% Eastern Hunter-Gatherers wither Western Hunter-Gatherer genes rarely present.

This individual was genetically female. Their mitochondrial lineage was part of the K1 haplogroup, which is commonly found in Europe today and thought to have Middle Eastern Origins [16].