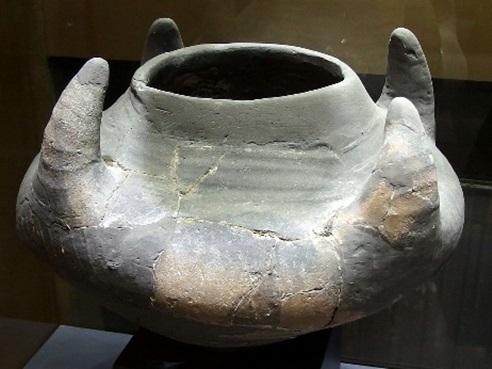 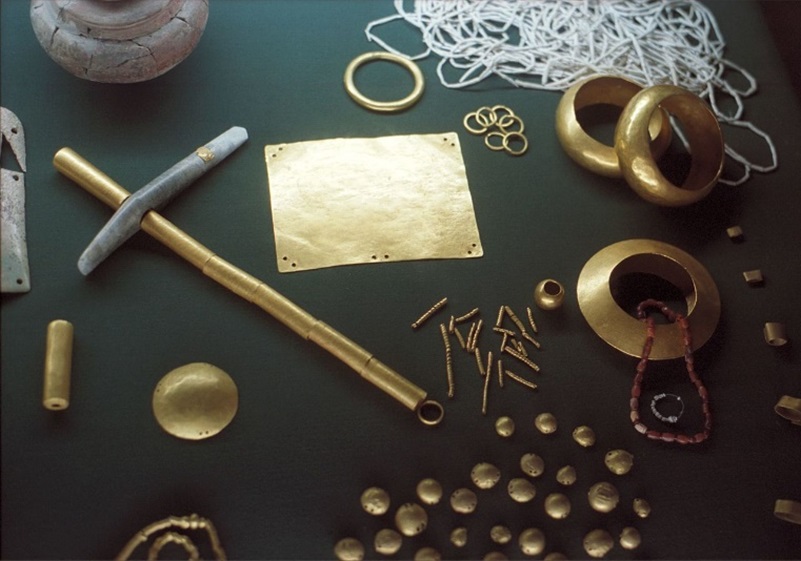 The transition to the Copper Age brought with it dramatic changes in social structures of Southeastern Europe. While the earliest farming communities had been small and relatively equal, there is evidence that during the Copper Age a hierarchy of skills and wealth began to develop [10-11]. Around 150 tell settlements appeared during this period throughout the Balkans [12]. Tells are artificial hills or mounds created by dense human settlements adding refuse material that builds up over hundreds of years.

Many sites show evidence of specific skills becoming the main occupations of certain individuals, such as potters, herders, and brewers, whereas before virtually everybody in a village would be able to farm as well as participate in other tasks. Specialized skills require a more complex social network in order to feed and house the individual making specific things. During this time evidence began to mount for the start of political classes and individuals with greater wealth, highlighted at the cemetery of Varna which had significant differences in grave wealth [13].

The Individuals from Yunatsite and Ivanovo:

The three individuals in this sample came from two sites in present-day Bulgaria. The site of Yunatsite is located on the outskirts of a village of the same name, which is 5 kilometers (3 miles) northwest of the city of Pazardzhik. The second site, called Ivanovo, is found some 20 kilometers (12 miles) south of the city of Targovishte. These individuals were carbon-dated to between 6,359 and 6,725 years old [12].

The site of Yunnatsite has been occupied for thousands of years, with artifacts found dating to the Copper Age, Iron Age, Roman, and Medieval times. The Copper Age part of the site was once a village with a number of houses found. It is thought that the village was destroyed in some sort of violent even, as the houses appeared to have been destroyed by fire. There was then a long period of around 1,000 years in which the site wasn’t occupied [14]. The individuals at this site were both women, with one estimated to be between 40 and 50 years-old, while the other was likely over 70 years-old. No grave good were found with these individuals.

The site at Ivanovo was a small tell site, meaning that the refuse and buildings of the inhabitants that lived there for some thousands of years made a small artificial hill in the landscape. Various copper age artifacts were found at the site included stone blades made of chert, a type of easily broken stone [15]. The individual buried at this site was buried near some pottery dating to the Copper Age [12]. There were no other grave goods.

Genetic analysis has shown that the southeast of Europe was a crossroads of migration flowing both east and west. More hunter-gatherer ancestry persisted in populations in the Balkans and up into Ukraine than in other areas of Europe after the arrival of farming [12]. Subsequent migrations of Yamnaya migrations around 5,000 years ago from the Caucuses brought new genetic input into Europe from Central Asian and the Caucuses. The individuals at Varna are much older than these sweeping migrations but appear to be related to Yamnaya migrants as well as local Neolithic peoples who had already been living in the area [12]. This suggests that there were contacts between both East and West that were quite ancient.