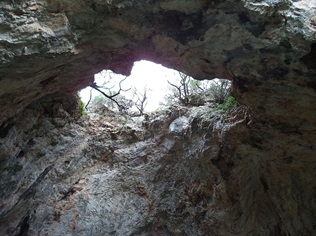 The Mesolithic in Croatia and the Balkans:

It used to be thought that the Mesolithic in the Balkans was a time of low population density when few scattered groups existed. These were people who were quickly over-run by farmers who arrived during the Neolithic [10-11]. This rather dim view of the period has been revised in recent years with archaeological evidence that points to a complex cultural network of peoples that may have lived in higher densities than expected and used both marine and mountain resources [12]. Complex stone tools for hunting game, scraping and working hides, as well as for fishing have been found. These Mesolithic people often camped at strategic sites in the mountains that gave them full view of moving herds of animals, and would travel seasonally between the coast and the upland areas.

The individual in this sample was found on the Island of Korčula in present-day Southern Croatia. The skeleton was of a female who was carbon dated to between 7,170 and 7,230 years old. She was estimated to be between the age of 35 and 45 when she died [13]. The cave site at Vela Spila has been excavated since the 1940s and has produced artifacts and human burials dating from the Late Paleolithic until the Bronze Age. One particularly remarkable find at the site was the discovery of ceramic figures dating to around 17,000 years ago, which represent the earliest ceramic art in Europe [14]. Complex ornamental shell decorations were common at this site and were a pattern that developed in the Mesolithic [15], being found in the surrounding layers in which this individual was buried.

Genetic analysis has shown that this woman was a direct descendant of European Upper Paleolithic populations and was most closely related to Western hunter-Gatherers. This contrasts them Eastern Hunter-Gatherers who were a distinctly different population that existed in the Mesolithic and have been found in areas of present-day Russia and Eastern Europe [13]. Her mitochondrial lineages came from the U5 haplogroup, which was extremely common among European hunter-gatherers of the Paleolithic and Mesolithic [16]. This haplogroup is still present among Europeans today, although migration of Anatolian farmers into Europe have reduced the proportion of this haplogroup.