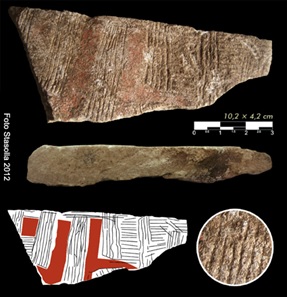 Incised stone art from the Epigravettian [18]

Early 20th century archaeologists used to think that Mesolithic people lived in small, mobile bands that moved about an open landscape. In the 1960s finds at the site of Padina in the Iron Gates region now in present-day Serbia upended these prior notions when archaeologists found ancient buildings and evidence of complex architecture and carved stone monuments [10]. Evidence is growing from across Europe that the Mesolithic was a time of increasing populations and a shift towards settled village life.

In the Eastern Europe boreal forests Mesolithic peoples employed a diverse set of hunting and gathering strategies, including fishing and sealing, which was also common throughout the Baltic [11-12]. Finds of large burial sites have suggested these people lived in large communities [13]. They made use of local forests to produce wooden structures and buildings.

In Western Europe, the Azilian people of Northwest Spain began using more marine resources and diversified their hunting strategies [14]. One of the hallmark tools found in the region is the Azilian harpoon, which has been found at multiple sites across the region [15].

In the Ertebølle culture found in present-day Sweden, Mesolithic peoples began producing pottery, which was likely used to store foods and for cooking [16]. Pottery was not only a major technical development, but also was a sign of the increasingly sedentary lifestyles of these people. Ceramics are heavy and had never appeared before when people needed to be highly mobile.


The Individual from Grotta d’Oriente:

The single individual in this sample was found in a coastal cave site called Grotta d’Oriente on the Island of Favignana in present-day Northwest Sicily in Italy. People lived in this cave and there were hearths and animal bones found in multiple layers dating from the Epigravettian all the way through to the arrival of agriculture in the region around 8,000 years ago [14-15]. This individual was dated by charcoal to between 11,816 and 12,249 years old and was found to be genetically female [16]. She was buried with a pierced shell ornament thought to be worn on her clothing and red ochre near her head and pelvis, suggesting ritual burial.

Genetic analysis has found that she was closely related to Paleolithic hunter-gatherer groups that lived throughout present-day Italy, France, and the Balkans. By the late Paleolithic there was a distinct difference between this southern region of Europe and areas further to the north in Central and Eastern Europe [16]. Her mitochondrial lineages belonged to the U haplogroup, which was very common among European hunter-gatherers [17]. This lineage is rarer today but can still be found among living Europeans.