The Iceman from the Ötztal Alps

Example of a Copper Age dagger [4] 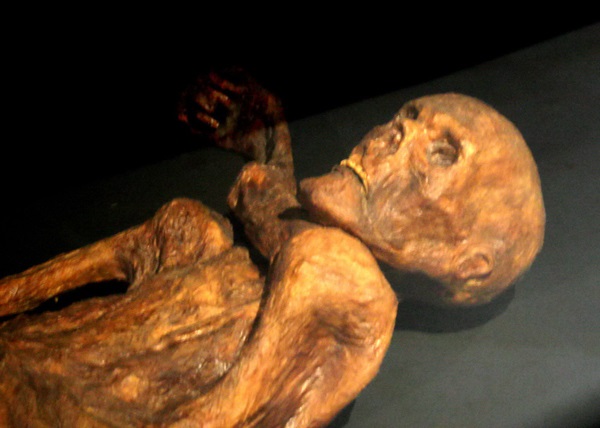 The Copper Age in Italy:

Tools are often thought of as being purely functional, but some evidence suggests that tools in Copper Age Italy also had some symbolic meaning. For instance, axes used for woodwork stopped being used long before they were too worn or broken to function. Furthermore, daggers are known to have been used in many sacrificial practices, and halberds, not the most effective weapons, appear to have had an important place in champion’s duels. Discoveries of both these weapons are noticeably unworn [11]. This, along with the fact that tools were used in burials to signify social standing, suggests that people in Copper Age Italy had a symbolic connection to their tools.

The Individual at Ötztal Alps:

The individual in this sample was found in present-day Italy in the Ötztal Alps, which run along the border of Italy and Austria. The individual was carbon dated to between 5,105 and 5,359 years old [12].

The individual, known as the Tyrolean Iceman, was discovered in 1991, when two hikers discovered a corpse partially covered by snow and ice whilst trekking the Tisenjoch Pass in the Ötztal Alps [13]. An arrowhead lodged in his left should suggests a violent death [14]. The iceman had sixty-one tattoos, which were produced by piercing the epidermis and rubbing in charcoal dust [15]. The tattoos have a simple linear geometric shape and are present on parts of the body that were most likely hidden, leading some to believe this may be an earlier attempt of acupuncture. It is known that the iceman suffered from osteoarthritis of the spine, and some of the tattoo marks appear to be in the same place that is targeted by modern acupuncture for this condition [16]. However, tattoos are also present in regions not known for acupuncture, such as the chest [15]. Furthermore, there are areas of musculoskeletal damage which have no tattoos [17]. It is believed that some of the osteoarthritis and inflammatory joint injury may have been caused by the presence of coronary heart disease and a Lyme disease infection [13,17] (this may be the earliest known case of human Lyme disease infection [13]). Genetic analysis suggests that the iceman would have had brown eyes, belonged to blood group O and been lactose intolerant [13].

Genetical analysis also revealed common ancestry between the iceman and present-day inhabitants of Corsica and Sardinia, and genetic distance with modern mainland Europeans [13]. This close affinity with modern Sardinians suggests that Alpine groups (such as the one the iceman belonged to) have a recent common ancestry with ancient Sardinians, possibly due to the diffusion of Neolithic peoples from Italy to Sardinia, and that Sardinians have a genetic history distinct to that of the rest of Europe, starting with a divergence 5,000 years ago.

The individual belonged to the mitochondrial haplogroup K, which is common in Europe today and was recently derived from U [18], the most common haplogroup among European hunter-gatherers of the Paleolithic and still exists in Europe today although at lower frequencies due to the genetic contribution of incoming European farmers [19]. He belonged to the Y-chromosomal haplogroup G, which is common in Europe today but thought to be of Anatolian or Iranian origin [20], and specifically to G2a4, which has only been found at high frequencies in Corsica and Sardinia [13].