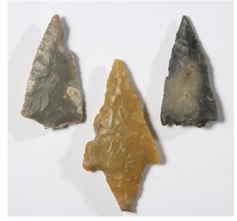 An example of Remedello arrowheads [15].

The Remedello Culture developed during the Copper Age in present-day Northern related Italy [11]. The name comes from the town of Remedello in Italy where several associated burials were found.

Genetic analysis of individuals of the Remedello culture has revealed that they are closely to individuals from Kumtepe, the oldest permanent settlement of Troas in Anatolia, which later become Troy. It is believed that this could demonstrate significant gene flow from Anatolia in to Europe, in a secondary migration event in the late-Neolithic/ Chalcolithic [12].

The Remedello people made halberds and daggers out of arsenical copper, but pure copper for flat axes. As arsenical copper has superior casting properties compared to pure copper, this is surprising, as it would be expected that the axes would be made out of the most hard-wearing material. However, it is believed that this differential use of copper was intentional. Although scientists cannot be certain of the reason for this, there are several possibilities. Firstly, it may be due to the need of axes was to withstand repeated blows, whereas daggers need to keep their edge. Secondly, it may represent a preference of colour, as pure copper is more yellow than arsenical copper [13]. Thirdly, it may be connected to the emergence of elites. Around the same time in southern Palestine, it is believed that prestige artefacts were made of arsenical copper, whereas practical objects were made of pure copper [14]. This same logic could be applied to the Remedello artefacts, in that axes were generally utilitarian, whereas daggers and halberds have less a functional use and therefore could have been a symbol of societal status [13]. This would mean that Remedello peoples were socially stratified, with a class of elites.

The Individuals of Remedello di Sotto:

Genetic analysis of the individuals in this study revealed that the Remedello individuals were lacking in a ‘Caucasian’ genetic component and were closely related to Neolithic farmers [16]. This suggests that the Remedello Culture did not interbreed with the Yamnaya migrants, or the migration into Europe had not reached present-day northern Italy by this time. This finding, as well as analysis of these individuals alongside analysis of others who lived more recently (up to 3,000 years ago) demonstrated that Bronze Age Europe (which quickly followed the Copper Age) was a dynamic time, with many large-scale migrations and population replacements [16].