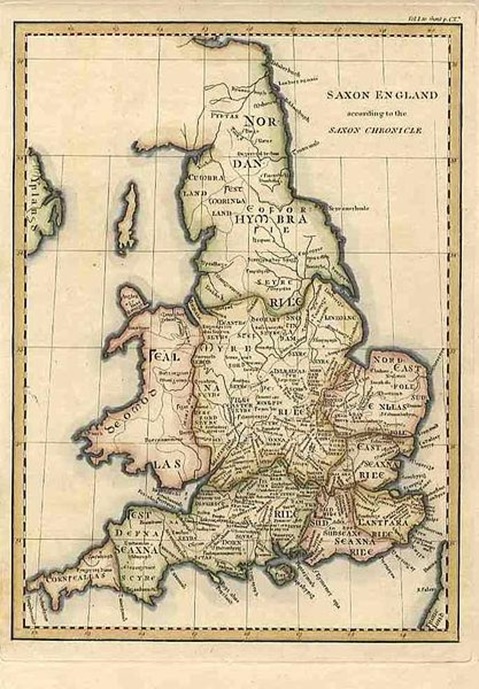 A map of the Anglo-Saxon British Isles [9] 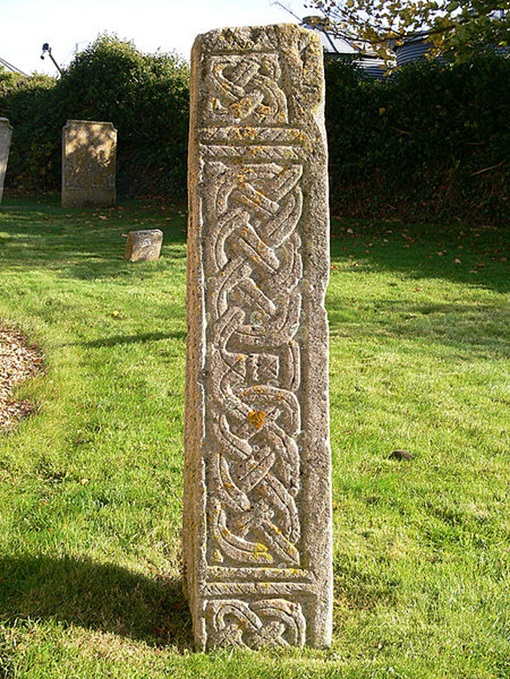 In the 5th AD the Roman Empire, on the brink of collapse, withdrew its armies from Britain to defend the remnants of the Empire elsewhere. In a period of intense European migration – the Völkerwanderung – Germanic tribes such as the Goths, Vandals, Angles and Saxons roamed across the continent [1]. The British Isles, undefended after the withdrawal of Roman troops, was vulnerable to invasion and received waves of settlers from north Germany and Scandinavia [2]. In the late stages of Roman Britain, part of the Empire’s army was comprised of Germanic auxiliary troops and their presence in the country encouraged this trend [3].

‘Anglo-Saxon’ is the term used for both the Germanic tribes who settled in Britain during this period and the language that they spoke. The Anglo-Saxons reached the eastern coast of Britain and travelled inland along Roman roads, settling in large numbers amongst the inhabitants of the country [3,1]. The name ‘England’ itself derives from the Anglo-Saxon name ‘Engla land’ meaning ‘Land of the Angles’. The Anglo-Saxons divided England into seven kingdoms – a heptarchy – that were initially based on extended kin groups. These kingdoms were: East Anglia, Essex, Kent, Mercia, Northumbria, Sussex and Wessex. Strikingly the genetic structure of British populations today mirrors that of the Anglo-Saxon tribal settlements in the 5th to 7th centuries AD [4,5]. The clans often fought amongst each other but – by the 10th century AD – were ultimately forced to unite in the face of escalating raids from Danish and Viking invaders.

Old-English, a derivative of West Germanic dialects, was the language spoken by Anglo Saxons and has left a linguistic legacy in the country: the pagan gods have lent their names to the weekdays –Tuesday from Tiw (god of war), Wednesday from Woden (god of the dead) and Thursday from Thor (god of thunder) [3]. Similarly, suffixes such as –ham and –ton – that would have denoted a village or farmstead – remain widespread in the British countryside [2]. Old English poetry and literary epics, still read today, such as Beowolf, show how important the values of loyalty, courage and strength were in Anglo-Saxon society [3]. As well as language and literature, Anglo-Saxon culture can be glimpsed in archaeological remains: buildings, cemeteries and burial sites.

Although Christianity had been introduced to Britain during Roman rule, Anglo-Saxon religion was predominantly pagan; based on Germanic mythology [3]. This all changed in the late 6th century when St Augustine, sent by the Roman Catholic Church, succeeded in converting King Æthelberht to Christianity which rapidly caught on across England [3]. Christianity brought with it membership into the powerful institution of European Christendom with political and economic rewards [1]. The Anglo-Saxons of England already had a strong trade with continental Europe –in metals, agricultural produce, cloth and slaves – which was boosted by the establishment of Christianity [1].

One Christian Anglo-Saxon cemetery has been excavated in the small village of Norton Bishopsmill, Teeside. Bishopsmill lies in the heart of Yorkshire, northeast of England, which would have been encompassed by the Anglo-Saxon Kingdom of Northumbria [2]. At this time, Northumbria was seeing large political changes: in the late 7th century, the region was unified as a single kingdom and by the 10th century, it lost its independence and became part of the Kingdom of England. Along with archaeological findings of beads and brooches the site yielding over one hundred buried skeletons [2].

From the inner-ear bone of one Anglo-Saxon male, buried at some point between 650 AD and 910 AD, a DNA sample was extracted [5]. From his DNA, we can tell that this Anglo-Saxon man was blue eyed with blond hair and had blood type A or B. He has the Y-haplogroup I1 [5], the most common type of haplogroup I in northern Europe. This haplogroup was typically associated with Norse ethnicity – and it is found wherever Germanic tribes, the Danish or Norwegian Vikings invaded [6]. This man, or his recent ancestors, arrived as part of the Anglo-Saxon invasion. However, his genetic profile differs from those commonly found among Yorkshire-men of the Iron Age and Roman period [5].

This example of regional discontinuity, between Iron Age and Anglo-Saxon men from the same region, shows that the Anglo-Saxon migrations had a dramatic impact on Britain. It is likely that 25 to 50% of British ancestry is Anglo-Saxon [7]. Furthermore, a later migratory event – around 800 AD – saw one Germanic group contribute to 35% of the genomes of those in central and southern England [8]. In fact, a map of the genetic variability across the UK today is almost identical to one depicting the Anglo-Saxon tribes, which this man would have been a part of.