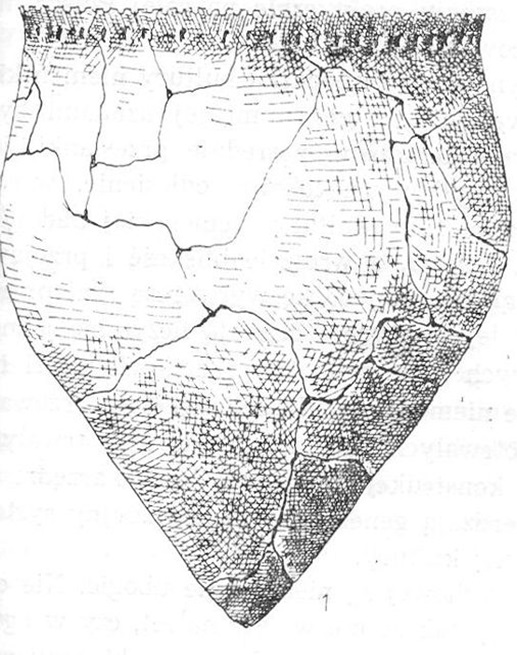 The Mesolithic in the Baltic:

The Mesolithic in the Baltic lasted much longer than it did in the rest of Europe. At a time when agriculture had spread rapidly throughout much of the continent most of the peoples of the Baltic region maintained a hunter-gatherer way of life. The adoption of farming eventually did occur but it was much more gradual, owing to the long harsh winters and short summers of the region [10-13]. Farming did not truly take hold until the start of the Bronze Age in the rest of Europe. Artifacts found at Baltic Mesolithic sites has proven there were contacts with agricultural societies in the rest of Europe for much of this period, and that these continued to exist for centuries. Pottery and stone tools associated with the Neolithic in Central Europe began appearing in archaeological sites that belonged to these hunter-gatherers [14].

The Kunda and Narva Cultures:

There were two major cultures in the Baltic prior to the full transition to agriculture in the region, the Kunda and the Narva cultures. The earlier of these two was the Kunda, which existed in the present-day countries of Estonia, Latvia, and Lithuania and lasted from around 10,500 to 7,300 years ago. The people of the Kunda were famous for producing elaborate bone points [15] and were heavily reliant on coastal marine resources. Much of their tool technology focused on fishing [16], and many harpoons, hooks, and spears have been found. The Kunda Culture was named after the Kunda site in present-day Estonia, which was one of the earliest known Mesolithic sites in the region dating to around 8,500 years ago [17].

The subsequent Narva Culture was a continuation of the Kunda Culture that lasted from 7,300 to 3,750 years ago. This was period of transition between hunter-gatherer Mesolithic societies and the farming cultures of the Neolithic [18]. The period saw the beginnings of some crop use and is known for pottery decorated with comb impression made by hair combs [19].

The twenty-two individuals in this sample were found at the Zvejnieki archaeological site in present-day Latvia near Lake Burtnieks. These individuals represent one of the larger collections of ancient DNA samples produced from a single site to date. Some of the individuals have been carbon-dated to 8,200 to 6,200 years old, and the archaeological finds have placed all of these skeletons within this date range, meaning that they come from both the Kunda and Narva cultures [20].

The site has been excavated since the 1960s and has contributed to our understanding of the increasing cultural complexity during the Mesolithic. The burials were often tightly packed and would have been disturbed when later burials were dug. This has been interpreted as these people revisiting their dead when interring new bodies [21]. Found within these burials were an assortment of hunting and fishing implements including flint spearheads, arrows, and bone harpoons. There were also amber and bone ornaments as well as pottery [21-22].

Genetic analysis of these individuals has found that there was continuity between the earlier Kunda Culture and the Narva Culture in terms of the people that lived there. The Narva people were the direct descendant of earlier hunter-gatherers, and shared both Eastern and Western hunter-gatherer genes. [20]. This contrasts with the pattern found in Central and Western Europe where there was more direct population replacement with the coming of farming cultures. It has been proposed that this continuity of hunter-gatherer genes contributed to the later spread of hunter-gather genes within Europe [21].

The mitochondrial haplogroups of all these individuals belonged to the U lineage, which were very common among European hunter-gatherers and can still be found within Europeans in the present day [23]. There were 7 females and 15 males in this sample. Six of the males belonged to the I2 haplogroup, which is a very ancient lineage found in Europe and West Asia today, and was common in the Mesolithic. It is thought that the I2 haplogroup originated in the Paleolithic [24]. The other 9 males belonged to the R1b haplogroup, which is a very ancient lineage that is thought to have arisen in Southeast Asia during the Paleolithic [25].