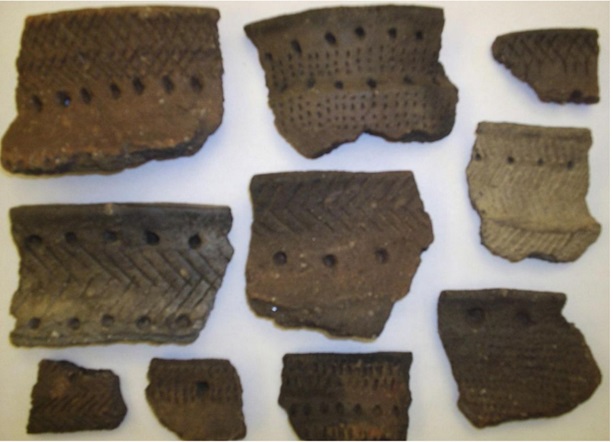 The Neolithic in Gotland and the Pitted Ware Culture in Gotland:

Mesolithic lifeways continued for an extended period of time on the island of Gotland in present-day Sweden. By 5,200 years ago farming had spread to nearly every corner of the European continent including the mainland of present-day Sweden. However, on the Island of Gotland, hunting and gathering had continued for another 1,000 years. The period between 5,200 and 4,300 ago in this area is known as the Pitted Ware Culture, which is named after the distinct ceramics produced by these non-agricultural societies that involved incised pits and grooves [10]. This culture is typically referred to as Neolithic in academic circles due to the overlap in time with the Neolithic elsewhere, despite the lack of agriculture on the island. There is evidence that these people had used domestic animals such as cattle that been brought from the mainland [11], but still maintained a primarily marine diet, focusing heavily on seal hunting.

The Individuals from Ajvide:

Five individuals in this sample came from the Ajvide site in Southern Gotland, while one was found at Ire in Northern Gotland [12]. Ajvide is located in Ekstra Parish in Western Gotland 45 kms (21 miles) south of the main city of Visby. The site was occupied from the Mesolithic to the Bronze age, and included many burials. There is some evidence it might have also have been used a place for processing seal fat [11]. The site of Ire is located 31 kms (19 miles) to the northeast of Visby. Ceramics and fish bones were found at the site, as well as burials dating the same period as the Ajvide site [12].

Genetic analysis has that these individuals were direct descendants of earlier Mesolithic hunter-gatherers that lived more widely throughout Scandinavia during the early Mesolithic [13-14]. By the time these individual died, most of their relatives on the Swedish mainland had disappeared, with only a few having intermixed with local Anatolian farming populations farming populations that had moved into the area.

Five of these individuals belonged to the mitochondrial U haplogroup which was the most common haplogroup among European hunter-gatherers of the Paleolithic and still exists in Europe today, although at lower frequencies due to the genetic contribution of incoming European farmers [15]. One individual belonged to the V mitochondrial haplogroup which is a very ancient lineage that is very rare among Europeans today but has been detected in ancient samples off Paleolithic hunter-gatherers from Europe. It is likely more than 9,000 years old [16].

While five out of six of these individuals was male, only one Y chromosome was successfully identified and belonged to the I haplogroup. This haplogroup is very ancient and was commonly found among hunter-gatherers in Europe and West Asia, particularly towards caucuses, likely having originated in European Paleolithic [17]. Today this haplogroup is very uncommon among European males as a result of population change caused by the arrival of agriculture.