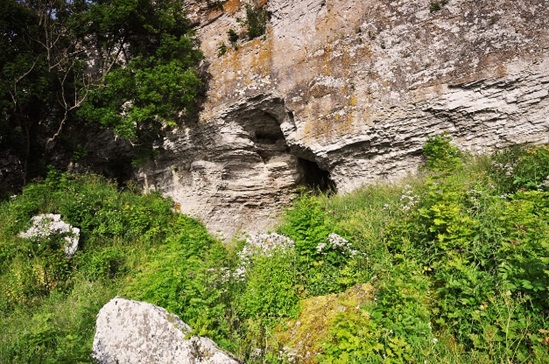 The Mesolithic in Gotland:

The end of the Paleolithic opened up new environments in present-day Sweden and Norway that had previously been inaccessible to hunter-gatherers. In the early Mesolithic there was a major expansion of peoples across Scandinavia, including into previously uninhabited islands. The island of Gotland was one such island which had never been connected to the Swedish mainland. It was exposed after the retreat of sea ice some 80 kilometres (50 miles) from the coast of the Swedish mainland [10]. Early Mesolithic foragers likely arrived using primitive watercraft. Research on artifacts and bone chemistry has revealed these newcomes began intensively using marine and freshwater resources after they arrived [11-12]. Blade tools and fishing equipment have been found at many sites. Caves were used as places to collect resources after hunting expeditions. Coastline sites from the period remain inaccessible due to the large rises in sea level since the Early Mesolithic. Some of the artifacts found on the island suggest cultural connections with other areas of the Baltic, including sites near the city of Pärnu on the west coast of present-day Estonia [13].

The Individuals from Stora Bjers and Stora Förvar:

Stora Förvar is a cave found on the island of Stora Karlsö, located 5 kilometres (3 miles) off the coast of western Gotland in present-day Sweden. The site was excavated in the late 19th century. Many of the artifacts found at the site would have been involved in frequent seal hunting expeditions [14]. These tools were similar to those found at other sites further south in Scandinavia, such as core axes [15-16].

These individuals were found to be closely-related to Western hunter-gatherers, which dominated western and central Europe during the Mesolithic [17]. This contrasts with some of the Mesolithic individuals found further north and west in present-day Norway, who were more closely related to Eastern hunter-gatherers and populations that lived further east in Europe. It is thought that the western Scandinavian Mesolithic individuals had come up from the south while those in northwest Norway had migrated west through a northerly route.

All individuals in this sample belonged to the U mitochondrial haplogroup, which was the most common haplogroup among European hunter-gatherers of the Paleolithic and still exists in Europe today although at lower frequencies due to the genetic contribution of incoming European farmers [18]. The single male in this dataset belonged to the Y chromosome haplogroup I, which is a very ancient haplogroup found commonly in Europe and West Asia today, and likely originated in Europe during the Paleolithic [19].