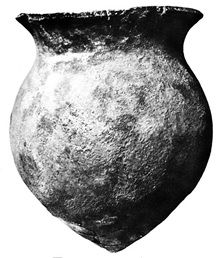 The Late Swedish Mesolithic and the Ertebølle Culture:

Much of Scandinavia has been uninhabitable during the Paleolithic, but during the increasing warmth of the Mesolithic peoples started to move into the areas of present-day Sweden and Norway. These people made heavy use of marine resources from the Early Mesolithic through well into the Neolithic, with a great body of evidence suggesting that seal-hunting and fishing were common [10]. The later part of the Mesolithic was a time of increasing cultural connections and the formation of a unified culture that included the present-day countries of Denmark and Southern Sweden called the Ertebølle Culture [11]. These people were particularly known for their decorated pots with elaborate funnel-shaped tops. Many artifacts show a strong connection to the cultures of present-day Germany and Central Europe [12]. Many archaeological sites from the period include middens, which were large collections of food refuse such as shells and fish bones. These middens showed that these people were relatively sedentary and used a wide variety of resources [13].

The Individuals from Kanaljorden, Motala:

The eight individuals in this sample were found at the Kanaljorden site near the town of Motala in present-day central Sweden. The site is near the Motala Ström River, which drains lake Vättern [14]. The skeletons found were clearly buried in a ritual manner, with skulls placed on wooden poles immersed in the bog [15]. The individuals found were assessed to be mostly between teenage years and middle age, but there were also a young few children. Mesolithic tools such as microblades attached to a wooden spear were also found.

All of these individuals belongs to the mitochondrial U haplogroup which was the most common haplogroup among European hunter-gatherers of the Paleolithic and still exists in Europe today although at lower frequencies due to the genetic contribution of incoming European farmers [18]. There were five males in this sample, all of whom belonged to the Y chromosome I haplogroup. This haplogroup is very ancient and is thought to have arisen in Europe during the Paleolithic. It still exists today in Europe and is found also in West Asia, particularly towards the Caucuses [19]. It was a common haplogroup among European Mesolithic individuals.