Chan do Lindeiro and Los Canes 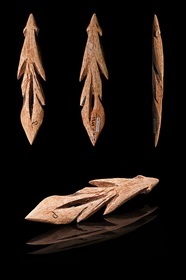 The Individuals from Chan do Lindeiro and Los Canes:

Two Mesolithic individuals from two different archaeological sites were used in this sample from present-day Northern Spain. One individual came from the Chan do Lindeiro site near the town of Pedrafita do Cebreiro in present-day Galicia in Northern Spain. This individual was found alone at the bottom of a fracture in a rock face that once had a depression at the bottom. Analysis of the bones and extracted ancient DNA indicated this person was a realtively young female and could be carbon dated to between 9,305 and 9,057 years old. Found near her were the remains of several Aurochs, which were a species of cow that was native to Europe and became extinct only a few hundred years ago [15-17]. Analysis of her bones suggested that she had lived a life of intense physical activity based on the changes to her bones from having strong muscles [15].

The other individual came from the Los Canes cave site, which is found in the Sierra de Cuera mountain range on the North coast of present-day Spain not far from the coastal town of Llanes. Three burials were found at this sites, which included grave goods such as perforated deer teeth, shells, and other bones placed in the graves [18-19]. One individual from this site underwent ancient DNA analysis and found to be genetically female. Skeletal analysis showed that she was an older woman at the time she died and was carbon-dated to between 7,295 and 7,035 years old [15].

Genetic analysis has found that these individuals were both closely-related to other hunter-gatherers within Europe. However, when compared to other samples taken in the Balkans from the same period, it was found that these two women were more genetically distant than people found in other Mesolithic populations [15]. It is thought that this might represent the genetic diversity in the area that occurred as a result of the region having been used as a place of refuge during the last glacial maximum. Both of these women belonged to the U5 mitochondrial haplogroup, which was the most common haplogroup among European hunter-gatherers and still exists in Europe today although at lower frequencies [20].