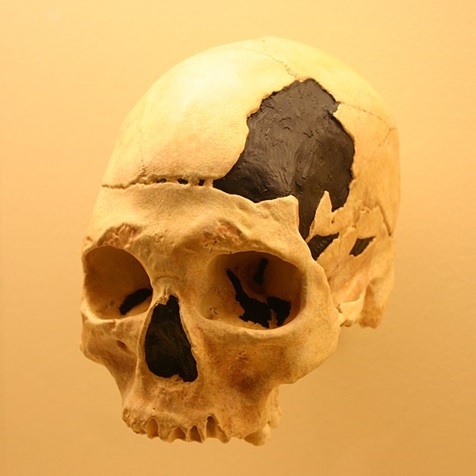 Cast of Oase 2, another human specimen found in Oase Cave [21].

The Aurignacian period was the very the very start of human habitation in Europe and was a time when people would have encountered Neanderthals. These two species differed in both appearance and technology. Neanderthals had lived in Europe for some 500,000 years and had become shorter and more heavily built than these modern human newcomers [10]. Archaeological sites from incoming modern humans have shown that their tools were often lighter and more diverse than their Neanderthal counterparts, but they may have learned from each other before Neanderthals eventually went extinct [11]. Interbreeding between Neanderthals and humans has been a topic of debate for some time [12-13], but it is now believed that humans interbred with Neanderthals at least a few times and Neanderthal DNA makes up a few percent of our own DNA today [14]. Some individuals such as those found at Oase Cave in Romania, contained higher percentages of Neanderthal DNA than in modern humans, suggesting that mixing with Neanderthals must have occurred recently for these individuals, possibly only a few generations back [14].

The individual in this sample was found in the Oase Cave, located in present-day Romania, and represents the earliest modern human for which ancient DNA has been sequenced, dating to between 37,000 and 42,000 years ago [14]. Being part of the early Aurignacian, this individual would have been a member of one of the first modern human groups to have ever set foot in Europe. The cave site was excavated in the early 2000s. Inside were found bones of many different mammals, including cave bears which often hibernated in such sites. Some of the bones had been moved into unusual arrangements, which suggested human activity. Human remains were also found [15-16].

This individual belonged to the N mitochondrial haplogroup, which is a very ancient general lineage that dates back to Paleolithic Africa, and is widespread across the world [19]. The Y chromosome was found to belong to the F haplogroup, which primarily found in Asia today and is thought to have origins in present-day India around 35,000 to 55,000 years ago [20].