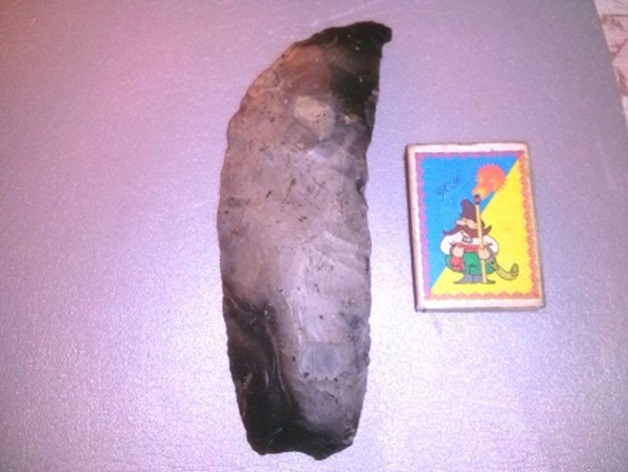 In Western and Central Europe, the transition to farming cultures was relatively abrupt, with local hunter-gatherers seemingly pushed to the margins of their former territories. The situation was different in Southeastern Europe where there appears to have been a more mixed transition that is associated with the domestication of the horse [9]. The Sredny Stog culture of around 7,000 years ago was the earliest of these pre-agricultural societies. Archaeological evidence shows these people developed strong social ties with incoming farming people from the Middle East, and would later join the Kurgan culture. The Kurgans expanded out of the Caucuses, spreading Indo-European languages and taking over large areas of Eastern Europe and Central Asia around 6,000 years ago [10-12].

The Individuals from Dereivka:

The site of Dereivka, where our nineteen individuals were found, is situated near a town of the same name, some 36 kilometers (22 miles) southeast of the city of Kremenchuk. These individuals were carbon-dated to between 6,722 and 8,070 years old [13]. The site of Dereivka was inhabited from the Eneolithic through to the Bronze Age, and had evidence for nearly two hundred burials. These burials were adjacent to settlements dating to different periods. The individuals in this sample were dated to the earliest evidence for agriculture in this region. The buildings had scooped out floors, as well as storage pits and hearths [14].

Similar to other areas of Europe, there were significant differences between the individual analyzed here and subsequent Neolithic farmers that moved into the area, who had strong recent Middle East connections. Also, by this point in time there were distinct genetic difference between Eastern and Western hunter-gatherers in Europe. The individuals in this sample were genetically related to Eastern hunter-gatherers, and had strong association with samples taken from present-day Karelia in Northwest Russia and Finland [15]. Genetic evidence suggests there was a more significant coevolution of Eneolithic and Neolithic cultures in Eastern Europe based on the persistence of hunter-gatherer lineages [9].

Consistent with this more mixed transition to farming, eighteen of the nineteen individuals belonged to the mitochondrial U haplogroup, which was the most common haplogroup among European hunter-gatherers of the Paleolithic and still exists in Europe today although at lower frequencies due to the genetic contribution of incoming European farmers [16]. One individual to the mitochondrial haplogroups H, which is commonly found in Europe today and has Paleolithic origins linked to West Asia [17]. Eleven males belonged to Y chromosomes from the haplogroup R, which is a relatively recent lineage thought to have arisen in this region during the early Holocene. The haplogroup is commonly present in Europe today and is thought to have spread with the expansion of Indo-European languages several thousand years after our individuals lived [18]. Five males belonged to haplogroup I, which is a very ancient lineage found in Europe and West Asia, particularly towards caucuses, likely originated in European Paleolithic [19].