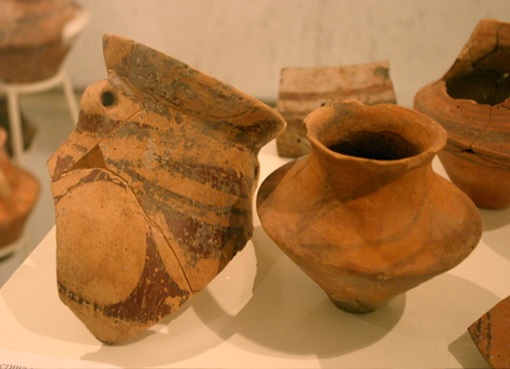 In Western and Central Europe, the transition to farming cultures was relatively abrupt, with local hunter-gatherers seemingly pushed to the margins of their former territories. The situation was different in Southeastern Europe where there appears to have been a more mixed transition that is associated with the domestication of the horse [9]. The Trypillian culture, which existed between 7,200 and 5,500 years ago, was an early Neolithic society. They had strong social connections to the Sredny Stog culture that appeared around 7,000 years ago. These cultures were eventually taken over by the Kurgan culture which expanded out of the Caucuses, spreading Indo-European languages and taking over large areas of Eastern Europe and Central Asia around 6,000 years ago [10-12]. Archaeological sites from the period are often identified by the presence of painted pots, which were unique in Europe at the time [13].

The four individuals in this sample were found in the Verteba Cave in present-day Western Ukraine and dated to between 7,000 and 4,700 years ago [14]. They were buried with pots and sacrificial animal bones. There were also art objects such as a bone plate carved in the shape of a cow’s head with a drawing of a woman adorning its surface [15].

Theses Neolithic individuals were found to have closer genetic ties to western European hunter-gatherers than the local eastern hunter-gatherer population. This contradicted previous studies that had shown an increase in ancient DNA from further east in into Asia with the arrival of farming [14]. One of these individuals from the cave was found to have steppe ancestry. This surprised the researchers because the influx of steppe people from the Caucuses was thought to have occurred much later than, and points to a more complex picture of migration during the period.

The mitochondrial lineages of these individuals fell into the H, T, and U haplogroups, which are common among Europeans today and are thought to have Paleolithic origins [16-19]. For the Y chromosome, three of the males came from the G haplogroup, while one came from the E haplogroup. The G haplogroup is of ancient Middle Eastern origin and is common among Europeans today [20]. The haplogroup E originated in either Africa or Asia in the Paleolithic and is extremely rare outside of Africa today [21-22].