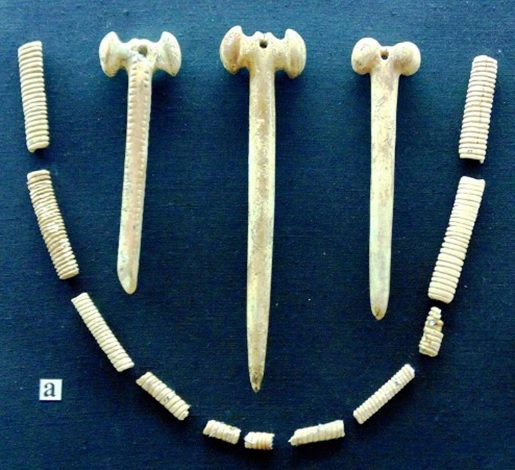 Example of ornamental bones from the Yamnaya culture [13]

Kurgan Culture and the Shift from Copper Age to Bronze Age:

The mass migrations from the Yamnaya culture into Europe in the Early Bronze Age is believed to be what brought Proto-Indo-European languages in to Europe. The Yamnaya culture were a part of a wider culture, known as the Kurgan Culture [3]. The Kurgan Culture were patriarchal and seminomadic stock-breeders, believed to have spoken an Indo-European language. The culture began in the Volga (south-eastern Russia) [3] around 6,000 to 4,000 years ago [4] before spreading both west (into Europe) and east (into Central Asia, Anatolia and Greece) [3]. The name “Kurgan” is the name for a burial mound common in Russia at this time [4]. Kurgans were barrow burials with large wooden chambers and rich assemblages of grave goods [5]. The climate at the time may have been key in the success of their migrations, as it may have favoured a pastoralist economy. As they migrated out, their language, religion, social structure and technology also diffused across many regions. There is believed to have been three major waves of Kurgan Culture migration – the first 5,500-5,300 years ago; the second 4,700-4,500 years ago; the third 4,300-4,200 years ago [3]. These migrations each catalysed the transition to the Bronze Age wherever they spread.

The Yamnaya were part of the wide-ranging Kurgan Cultures from the Pontic Steppe region of present-day Russia and Ukraine that are now known to have migrated into Central Europe [6]. It is believed that Yamnaya migrations brought Proto-Indo-European languages into Europe [7]. The Yamnaya were to the Samara Culture, one of the earliest of the Kurgan cultures. The people of the Samara Culture lived in permanent dwellings and herded cattle. Remains of pottery found at archaeological sites and specific type of burial practices indicated that the culture began around 7,300 years ago, and these people may have arrived into the Pontic Steppe region from the west in a region around the northern edge of the Black Sea. The Samara appear to have had trading links with Balkan peoples, evidence by the use of imported metal objects that are of Balkan origin [8].

The Yamnaya developed sophisticated metal-working technology and animal herding skills, with horse-riding an important part of their culture. We know that in Europe these incoming migrants interacted with local Neolithic populations and that sometimes these meetings were not always friendly. There is evidence for violence appearing in the archaeological record of Europe [9,10]. Despite this, there are also clues that they must have intermarried. Chemical analysis of teeth has shown that many individuals in grave sites across the continent were a mix of locals and foreigners [11] and there were also mixed sets of both Neolithic and Yamnaya artifacts found. This new incoming Yamnaya culture gave rise to the Corded Ware and Bell Beaker cultures that developed in following centuries [12]. Some researchers now believe that they brought with them the earliest forms of Indo-European languages, the ancestor of the languages spoken in Europe today [6].

Genetic analysis of the individuals in this sample revealed that the Yamnaya steppe herders 6,000 to 5,000 years ago were descended from both eastern European hunter-gatherers and Near Eastern populations [6]. Admixture between Russian and Near Eastern populations began as early as the Eneolithic [14]. The Neolithic farming cultures once present in Eastern Europe appear to have been replaced by the Early Bronze Age Yamnaya culture by 5,000 years ago [15]. Furthermore, the analysis revealed that there was strong selection in Europe for lactase persistence (the ability to digest dairy products). Other genes relating to diet were also selected for, probably as a result of the introduction of different diets [14]. Three of the individuals in this sample belonged to the mitochondrial haplogroup H, which is commonly found in Europe today and is known to have Middle Eastern origins. It has been found in Mesolithic hunter-gatherers, and existed in Europe prior to the arrival of agriculture [17]. The final individual belonged to the mitochondrial haplogroup U, which was the most common haplogroup among European hunter-gatherers of the Paleolithic and still exists in Europe today although at lower frequencies due to the genetic contribution of incoming European farmers [18].