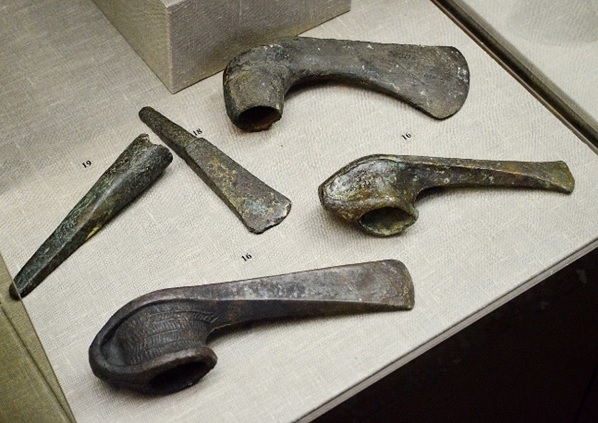 The Andronovo Culture was a culture in Bronze Age Eurasia, flourishing around 4,000 years ago. Because the culture spread across such a large area (from Europe to China) and there were so many regional variants, it is often referred to as a family of cultures [4]. It played a crucial role in the spread of Bronze Age technology through the Eurasian steppe, and may have even been the culture to introduce bronze metallurgy to China [3].

Despite the wide scale geographical occurrence of the Andronovo Culture, there is much debate over its origins and chronology – it is unknown whether the similar but slightly different cultures in each region were due to a singular culture spreading and evolving over space and time, or many distinct cultures becoming more similar as technologies and practices were shared from neighbouring culture to neighbouring culture [4].

Andronovo burials were located near lakes and rivers. Usually, cemeteries included between ten and sixty tombs. Burial structures were usually circular (or sometimes square) enclosures, made from large upright stones. Sometimes, the structure would be covered by a mound of dirt, reaching one and a half metres high [5]. The burials may also have been marked by large circles of stones [3]. In contrast to other local cultures, Andronovo burial structures were isolated rather than in clusters. Inside these enclosures were rectangular graves, sometimes lined with small logs or stones. The graves would be built in the exact centre of the enclosures. The bodies would generally be laid in the graves on their left side, although their exact position was determined by the position of the sun at that time of year [5].

At least one pottery vessel would be buried with the individual, using facing their head. Other than pottery, grave goods are rarely found in Andronovo graves, although there have been some examples of small bronze artefacts, including beads, earrings, plaques, buttons, needles and knives [5]. Andronovo people also sacrificed cattle, goats and sheep in rituals such as burials [3].

Andronovo pottery has been divided into two distinct types – domestic and ceremonial. The domestic pottery is more simplistic in design, whereas the ceremonial pottery is covered in an intricate geometric pattern [5], including finger-prints, triangle, zigzag and herringbone patters [3].

The site of Kytmanovo was a burial ground. Most burials were identified as belonging to the Andronovo Culture. Thirty-seven graves were excavated at the site [8]. Three of the individuals in this sample were female, while one was male [7]. One of the females is believed to have had the plague. She was aged thirty to thirty-five, and was buried with two children, one of whom was less than a year old and was laid in front of the woman. The other child was aged four to six years old. The adult was buried on her left side in a crouched position with both of the children on their right side as if they are looking at the adult, typical of the Andronovo people. In contrast to all other known graves at Kytmanovo, this was a simultaneous burial. This implies that these individuals were all killed by an outbreak of the plague [8].

The grave goods found in this grave include three pots – one for each individual. The size of the pot is correlated with the age of the individual it is buried with. Several bronze plaques were also associated with the adult, although no gold artefacts were found. Because this is a relatively small amount of grave goods, it is believed that these individuals were not of a high social class, seven out of the thirty-seven graves at Kytmanovo were found to have had golden objects. Istotope analysis of the individuals in this sample revealed that they mostly got their protein from C4 plants (a type of flowering plant) and freshwater fish [8].

Genetic analysis of the individuals in this sample revealed that that Bronze Age Eurasia was a time of widescale migrations and population replacements. Furthermore, the Andronovo people were found to be genetically similar to the Sintashta people, and clearly distinct from the Yamnaya people, suggesting that the Sintashta people gave rise to the Andronovo people. Towards the end of the Bronze Age, the Andronovo Culture appears to have been replaced by multi-ethnic Iron Age cultures, who show gradual admixture with East Asians [7].

All four of the individuals in this sample belonged to the mitochondrial haplogroup U, which was the most common haplogroup among European hunter-gatherers of the Paleolithic and still exists in Europe today although at lower frequencies due to the genetic contribution of incoming European farmers [9]. Although there was one male in this sample, Y-chromosomal haplogroup taken could not be obtained.