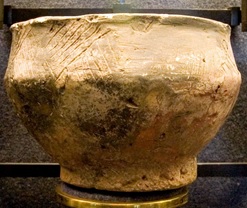 An example of a Srubnaya pot [6]

The Srubnaya Culture, also known as the Srubna and Timber-grave Culture [3], was a late Bronze Age Culture (3,200 to 3,700 years ago) in present-day Southern Russia [4].

The Srubnaya people general lived in a single-family homestead, with a house big enough for up to twenty people. Many generations would have lived in the house together, with a single family using the same house for over one hundred years. The walls were wooden and covered with clay or thatch. There would have been a fireplace, and a single bed where the entire family slept. Houses would have been five or six kilometres (three or four miles) away from each other, generally next to rivers or creeks [3].

Each house would have had a burial ground, located not far from the house, where the deceased members of that family would have been buried. The walls of the graves would have generally been wood, giving the culture the name Timber-grave. Sroub, the root of the word Srubnaya, is the Russian word for a log cabin. Occasionally, walls would have been slabs of stone. Graves were covered by low mounds of dirt. The typical Srubnaya grave is not rich in grave gods, but usually has a pot placed near the head of the individual, and sometimes bone buckles, stone mace heads, or bronze rings and knives. Individuals were buried in a crouching position on their left sides, with their hands in front of their faces which were generally facing east. Occasionally single graves have been found outside of the identified cemeteries next to the houses, and it is believed that these represent victims of rituals [3].

The Srubnaya people also performed rituals involving animals. At one Srubnaya settlement, there is evidence for the ritualistic killing and consumption of sixty-four dogs and several wolves. It does not appear that the dogs were eaten due to starvation, because of the known presence of sheep and cattle at the settlement. Furthermore, the dogs’ heads appear to have been chopped into small pieces by an axe, whereas the other animals were butchered normally, again suggesting a ritual rather than standard food preparation. Because almost all of the dogs sacrificed were male, it has been suggested that this ritual was a male rite of passage. In a nearby cemetery, there was an unusually high number of young individuals and pollen from medicinal plants. This has led some researchers to believe that this particular settlement was known for its ritualistic abilities, and thus people from other settlements would bring their sick children there with the hope of them being healed [5].

The Srubnaya peoples took care of their local ecological environment. They used a lot of wood, but appear to have practiced coppicing. This means that, rather than cutting down forests, they cut lowland trees such as alder and willow to the length of around one meter. This means that, rather than killing the tree, it can grow back to its previous length in just a few years [3].

The Srubnaya peoples took care of their local ecological environment. They used a lot of wood, but appear to have practiced coppicing. This means that, rather than cutting down forests, they cut lowland trees such as alder and willow to the length of around one meter. This means that, rather than killing the tree, it can grow back to its previous length in just a few years [3].

Bronze Age Eurasia was a time of widescale migrations and population replacements [8]. Genetic analysis of the individuals in this sample found that the Late Bronze Age Srubnaya people had about seventeen percent Anatolian Neolithic ancestry. The source of this ancestry is believed to have travelled through the steppe from a more eastern region. They may have got as far as central Europe, but it does not appear that the Srubnaya people were involved in these westward migrations [7].

One of the individuals in this sample belonged to the mitochondrial haplogroup J, which can be found in about 12% of the present European population and is also found in Middle East and North-East Africa. It originated in the Paleolithic (45,000 years ago), potentially in the Caucuses area [9]. Individuals of this haplogroup may produce higher body heat – a trait which may have been selected for in northern Europe [10]. One of the individuals belonged to the mitochondrial haplogroup I, which dates to the Paleolithic Iran/Caucuses area, and likely arrived with steppe peoples into Europe [11]. The final individual belonged to the mitochondrial haplogroup K, which is common in Europe today and was recently derived from U [12], the most common haplogroup among European hunter-gatherers of the Paleolithic and still exists in Europe today although at lower frequencies due to the genetic contribution of incoming European farmers [13].

The male in this sample belonged to the Y-chromosomal haplogroup R1a, which has recently origins of around 5,800 years and is associated with the spread of Indo-European languages and Steppe peoples. It is common in Eastern and Central Europe today [14,15].