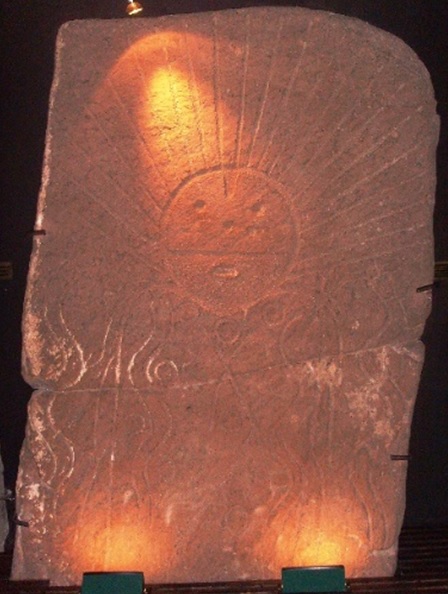 Example of a carving on an Okunev stellae, believed to be a depiction of a solar deity [11]

The Sintashta Culture was a Bronze Age culture in present-day Russia. They relied on cattle, sheep, horses, goats, dogs and pigs [4], and practiced large-scale animal sacrifice [5]. The culture appears to have emerged suddenly near the Ural mountains, between 3,000 and 5,000 years ago [4] and is characterised by complex settlements with fortification systems, metal production and innovative warfare technologies, such as spoke-wheeled chariots [4,6]. Because of this, many believe that the Sintashta Culture represents the emergence of complex hierarchal societies, in the form of chief leadership and territorial control. The people may have spoken an early version of the Indo-Iranian languages [5].

The Sintashta people appear to have originally lived in oval-shaped settlements. Over time, these developed into larger, rectangular shaped settlements, surrounding the original ones. Settlements were spaced roughly twenty to thirty kilometres (twelve to nineteen miles) apart. It has been suggested that some settlements were fortified whereas some were not, representing the social status of the inhabitants [5].

The Sintashta economy was mainly based on the livestock herding of cattle and horses, although there is also evidence for fishing and copper metallurgy. Surprisingly, there is no evidence for the farming of plants. It is believed that they lived off of fish and milk and meat from a variety of livestock. They also appear to have eaten some wild plants, such as wild strawberries, and used other wild plants for building, such as birch [4].

The presence of evidence of military activity in places where the Potapovka and Sintashta cultures lived nearby one another suggests that the two people occasionally fought. However, genetic evidence suggests that the two cultures were actually closely related, and there was probably some degree of interbreeding between the two [7].

The Potapovka Culture burials were covered with a small mound of dirt on top, and were very similar to those of the Sintashta Culture. Again, this indicates that there was significant admixture between the two cultures, leading some to believe that they were actually two branches of the same culture [8].

The Potapovka Culture had their own type of pottery, which is believed to have emerged locally. Furthermore, every single site identified to both the Potavka and Sintashta Cultures has their own unique style of pottery, which suggests that Bronze Age Russia was a time of cultural genesis [8].

The Okenuv Culture appeared around 4,000 years ago. It was first identified at a site in Khakassia, Southern Central Russia. The culture may have developed from a Neolithic group in the neighbouring republic of Tuva, before spreading across parts of the Eruasian steppe. Evidence suggests that there was a complex interaction between these people and the indigenous Neolithic population, and other immigrants. They are believed to have interbred with both of these groups, and much of their burial practices are clearly influenced by other groups of immigrants [9].

The Okunev Culture had pottery decorated with geometric designs, such as triangles, grooves, and rhomboids. Comb-impressed pottery and pottery decorated with fir trees, typical of earlier cultures in the region, are also commonly found at Okunev sites [9]. The Okunev people would put stelae (large upright stone slabs) on their graves. These stelae would be carved with imagery, often of the local mountains [10].

The four individuals in this sample were found at three sites in present-day Russia. Two of the individuals were found at the site of Verkhni Askiz Village, which is seventeen kilometres (eleven miles) west of the village of Askiz, in the republic of Khakassia. The site of Utyevka IV is one kilometre (two thirds of a mile) northeast of the village of Utyevka in the region of Samara. The site of Stepnoe VII is ten kilometres (six miles) west of the town of Verkhneuralsk. The individuals in this sample were carbon dated to between 3,896 and 4,340 years ago [12,13].

Genetic analysis of the individuals in this sample revealed that Bronze Age Eurasia was a time of widescale migrations and population replacements. Furthermore, the presence of European Neolithic farmer ancestry in the Sintashata individual suggests that the culture may have developed after an eastward migration of the Corded Ware Culture. There was genetic similarity between the Okunevo individual and present-day Native Americans, suggesting that this culture was related to the people in the Neolithic who contributed genetic material to the Native Americans [13].