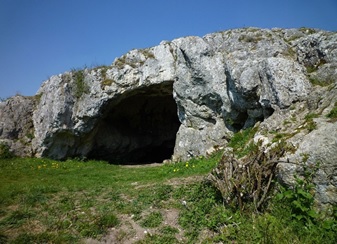 Mesolithic archaeological material has been found at a number of sites in Southwest Germany, most commonly in cave deposits, but also on lakeshores and riverbanks where it appears that Mesolithic hunter-gatherers lived [10]. The 5 individuals in this particular sample were radiocarbon dated to the late Mesolithic and were found in the Ofnet Höhle cave of the Franconian Jura of present-day Germany [11]. This cave site had multiple burials with cut marks on of human skulls that archaeologists have suggested to be potential evidence of cult or religious practices [12].

These individuals were found to be more closely-related to Middle Eastern hunter-gatherers than ancient DNA samples taken from earlier Paleolithic populations of the region dated to before 14,000 years ago [11]. While the major influx of West Asian genetic lineages appeared later in the Neolithic, this finding indicates that European peoples were already interacting with neighboring regions in the Mesolithic. This was also shown to be true in analysis of mitochondrial lineages, which were all from the U5 haplogroup. This lineage is thought to have arisen in the Paleolithic of West Asia and is common among Europeans today [13]. DNA from only one Y chromosome was recovered and belonged to the F haplogroup, which is today found primarily in Asia and likely originated in India between 35,000 and 55,000 years ago [14].