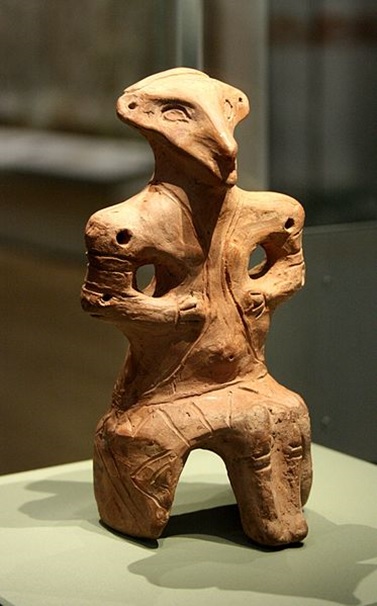 The Vinča was a Neolithic culture that primarily existed in the present-day countries of Romania and Serbia, with the northwestern margins extending into present-day Hungary between 7,700 and 6,500 years ago [9]. It was named after the large settlement discovered in 1908 at Vinča-Belo Brdo [10], which is still being analyzed by archaeologists to this day. It was a very rich early agricultural society that produced an array of ceramics, and complex stone tools. They were particularly known for their clay figurines depicting people and animals, as well as possibly mythical figures [11]. It is also thought that there was a large increase in population during this period, making this one of the most productive areas of Europe during the time [12].

Near the end of the Vinča period, copper objects and evidence of copper metallurgy appeared which is believed to be the first example of this technology within Europe [13]. The end of the Vinča heralded the start of the Copper Age.

The six individuals in this sample came from two sites near the southern border of present-day Hungary, to the north of Croatia. The site of Szederkény-Kukorica-dülö is located 19 kilometers (12 miles) Southeast of the city of Pécs with the site of Versend-Gilencsa nearby by, being found only 5 kilometers (3 miles) to the east. These individuals were carbon-dated to between 6,851 and 7,400 years old [14].

These sites are thought to have represented a small colony of Vinča people [15] at the northernmost part of this culture’s range. The site of Szederkény was inhabited from the Neolithic through to the Bronze Age, with evidence for Neolithic houses. The graves used for this sample dated to the early Vinča period [16-17]. There were no reported grave goods. The site of Versend-Gilencsa also had evidence for Neolithic houses, with artifacts such as pottery showing connections with the neighbouring Sopot culture. The analysis of this site’s skeletons remains unpublished [14].

Genetic analysis has shown that peoples from the Vinča Culture were closely-related to people from the Tisza, Sopot, and Starčevo cultures. These people were the descendants of farmers that had migrated from Anatolia, but also had genetic input from hunter-gatherers that had previously lived in the region [14]. The amount of hunter-gatherer content varied, and likely represented different types of interactions between these peoples, some of which were friendly and some hostile.