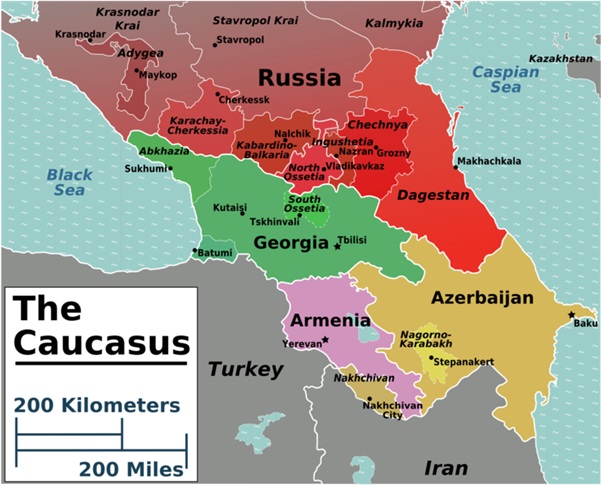 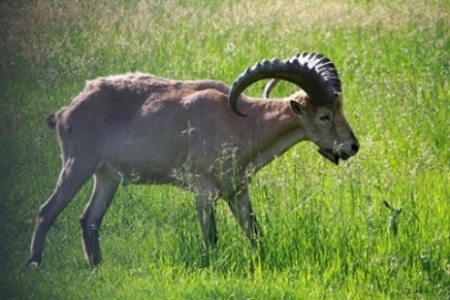 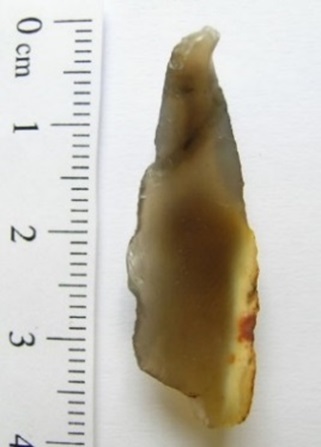 The Epipaleolithic Period in the Caucasus

The Epipaleolithic period, also known as the Mesolithic, occurred around 18,000 – 7,000 years ago in the Caucasus. This is an area located between the Black Sea and Caspian Sea, comprised of the countries of Armenia, Azerbaijan, Georgia and Russia. The region is dominated by the Caucasus Mountains, which act as a natural boundary between Asia and Eastern Europe.

During the preceding Upper Palaeolithic period (roughly 50,000-10,000 years ago), the Caucasus had been inhabited first by Neanderthals, and then modern humans. Our closest evolutionary relatives, Neanderthals were hunters who produced stone tools and were capable of creating glues, using pigments and even building structures [1, 2]. Around 35,000-40,000 years ago, sites such as Dzudzuana Cave in Georgia display evidence of the abrupt appearance of a fully-developed material culture, including a lithic technology made up of stone blades and bladelets, a wide array of bone tools (some with geometric designs), and pendants made from animal teeth [3, 4, 5]. These artefacts were completely different to the tools found in the Caucasus prior to this date, suggesting that this technology was brought by a new population, most likely modern humans arriving from the Near East. Indeed, the Caucasus would have acted as a perfect “dispersal corridor”, allowing humans to spread into Asia and Europe.

From 25,000 – 18,000 years ago, a climatic event known as the Last Glacial Maximum occurred [6]. This was a time in which ice sheets were at their greatest extension, covering large areas in the Northern latitudes, and little material culture is found in the Caucasus during this period. By 18,000 years ago, temperatures began to rise and deglaciation occurred. Around this time, the Upper Palaeolithic in the Caucasus begins to converge with the subsequent period of time, known as the Epipaleolithic or Mesolithic era [7].

Evidence dating to the Epipaleolithic is fairly scant in the Caucasus. The vast majority of sites are caves and rockshelters, which appear to have been previously occupied during the Upper Palaeolithic [7]. During this period, inhabitants of the Caucasus would have relied on intensive hunting (most likely deer, bear, wild boar, Caucasian tur and wild goat) to survive. However, pollen evidence from Satsurblia Cave in Georgia indicates that wild cereals were also an essential part of the Caucasian diet [8].

Epipaleolithic material culture in the Caucasus was characterised by a highly developed blade technology, which included geometric microliths - tiny flint blades, no more than a few centimetres long, which were attached to wooden handles. These tools were similar to the Epigravettian industry of central Europe. Towards the end of the era, crescent-shaped microliths known as lunates became popular [9]. Evidence of ochre and pierced shells suggests these Caucasians also created personal ornaments.

The Epipaleolithic presence in Georgia

One Epipaleolithic site was Kotias Klde, a rockshelter in Western Georgia, near the Kvirila River. Epipaleolithic layers at Kotias date to 12,400 – 9,500 years ago, and are excellently preserved [10]. Faunal evidence shows that the people of Kotias would have been hunters, who occupied the rockshelter during the summer and targeted boar, deer and bear. Cut marks on skeletal remains suggest that bears may have been pursued for their fur [9]. Bear and boar are both dangerous animals, and appear not to have been hunted during the preceding Upper Palaeolithic. Perhaps new tools or hunting strategies allowed the Epipaleolithic Caucasians to hunt them. The stone tools found here are mostly blades and triangular microliths, the majority of which were not produced at this site.

Human remains found at this site date to 9,500-9,900 years ago [11]. One individual was genetically sequenced – a man, who likely had light skin, dark hair and brown eyes. He was also probably lactose intolerant – the ability to digest milk in adulthood only became common after agriculture was introduced in Europe.

DNA analysis reveals that people from Kotias were genetically similar to Caucasian people dating to the preceding Upper Palaeolithic period, specifically individuals from Satsurblia Cave, another site in Western Georgia. Analysis shows that Caucasian hunter-gatherers from both the Upper Palaeolithic and Epipaleolithic were genetically distinct compared to hunter-gatherers from the rest of Europe. This split between the two populations occurred around 45,000 years ago, as humans migrated from the Near East, and one group stayed in the Caucasus, whilst the other expanded further into Europe.

These Caucasian hunter-gatherers were likely the ancestors of the Yamnaya people – a Bronze Age population who occupied the Pontic steppe around 5,300 – 4,600 years ago. Nowadays, the Caucasian populations of the Upper Palaeolithic and Epipaleolithic are still genetically very similar to modern day Caucasians. The individual from Kotias carried mitochondrial haplogroup H13c and Y-chromosome haplogroup J, both of which are found at high levels in Georgia today [11].

Interestingly, Caucasian hunter-gatherers also contributed DNA to the genetic makeup of modern Central and South Asian populations, particularly in India [11]. This genetic movement was likely caused by the migration of people, and may be linked to the spread of Indo-European languages.