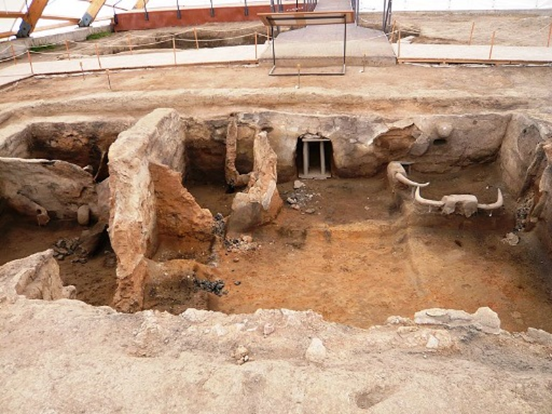 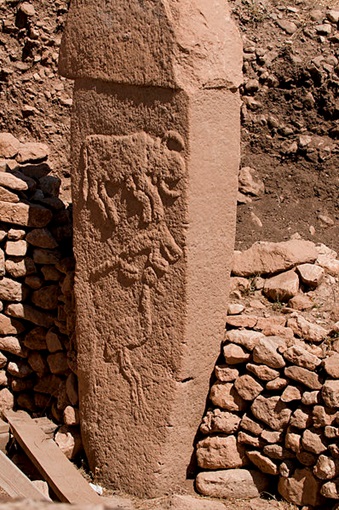 The Neolithic presence in ‘Ain Ghazal:

‘Ain Ghazal was one of the largest Neolithic settlements in the Levant (modern-day Israel, Jordan and Syria). Located in Jordan, on the outskirts of the capital of Amman, the site covered an area of 14 hectares, and was continuously occupied from around 10,200 to 8,000 years ago [19].

Due to its location on the side of a valley, ‘Ain Ghazal was terraced, and made up of rectangular, mud-brick buildings, all of which conformed to a particular architecture – each house was comprised of a large, square room with a circular hearth, and a smaller anteroom [14, 20]. Floors and walls would have been covered in a lime plaster, sometimes coloured with red ochre. Four structures were noticeably different. One was round, with a large hole in the centre of its floor. Purposefully built channels may have been designed to carry liquids away from this central hole [14]. At a similar structure, over 30 half-size human figurines were buried. Crafted out of reeds and plaster, these models had clothes, hair and tattoos [21]. Numerous smaller clay figures, both human and animal, have also been discovered. These distinctive buildings may have been ritual centres of some kind [22].

The people of ‘Ain Ghazal farmed barley, wheat, chickpeas and legumes, and herded domesticated goats, as well as supplementing their diet by hunting wild fauna. During the later stages of occupancy, they relied heavily on domesticated species, beginning to herd pigs and cattle [20]. At the same time, the population of ‘Ain Ghazal grew to around several thousand people [23]. This rapid population expansion was likely caused by the migration of refugee groups from elsewhere in the Levant. Many settlements collapsed in the late Neolithic due to population growth, intensive farming and over-exploitation of the environment, and survivors joined remaining communities. Unfortunately, this additional population pressure may have caused the economy of ‘Ain Ghazal to collapse as well – by around 8,500 years ago, the population had dropped to one-sixth of its previous size [14].

Over 100 burials have been found at ‘Ain Ghazal, often underneath the floors of homes [20]. These graves were regularly re-opened – small caches of skulls have been discovered elsewhere, having been removed after death and plastered [7]. However, some individuals appear to have been thrown unceremoniously into refuse pits after death. It seems that only certain people were selected for burial within their homes, and an even smaller minority were selected for the detachment of the skull [14].

Almost one-third of the individuals buried at ‘Ain Ghazal were babies under the age of one, suggesting infant mortality was very high. Many of the adults show evidence of enamel hypoplasia, a tooth defect often caused by poor health or malnutrition in childhood [20].

The DNA of twelve Neolithic individuals from ‘Ain Ghazal has been analysed [7]. Genetic analysis suggests that Neolithic farmers from the Levant, such as these individuals, had very similar DNA to the Natufian hunter-gatherers of the preceding Epipaleolithic period. It seems these Levantine farmers were direct descendants of the Natufians, and can trace approximately two-thirds of their ancestry to them.

Analysis shows that there were several genetically differentiated groups in West Asia during this period. Farmers from the Levant were genetically very dissimilar to groups living in Iran. In fact, Iranian farmers appear to have been relatively isolated during the Neolithic period, rarely interbreeding with other West Asian groups.

Levantine farmers derived around a quarter of their ancestry from the ‘Basal Eurasians.’ The Basal Eurasians are a lineage which split off prior to the differentiation of all other European lineages, and prior to the interbreeding between Neanderthals and modern humans that occurred around 50,000 – 65,000 years ago [24]. These farmers therefore likely had low amounts of Neanderthal ancestry.

Three of the ‘Ain Ghazal specimens had Y-Chromosomes belonging to haplogroup CT, a very ancient haplogroup that is common worldwide today [25, 26]. Another two belonged to haplogroup E1b1b1, which may have originated in East Africa, and is commonly found in Africa today [27]. The individuals from ‘Ain Ghazal belonged to mitochondrial haplogroups T1a, K1a and R0a. Haplogroup R is of very ancient ancestry and is common across the globe, whilst T is today found in Central Asia and K in Europe. Both T and K likely originated in the Middle East [28, 29, 30].