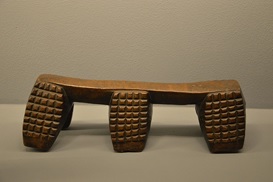 The history of the Zulus is strongly intertwined with the history of Bantu expansions and the appearance of agriculture in Africa. The Bantu peoples are connected by language, and the origins of agriculture in West Africa, which developed between 2,000 and 4,000 years ago in an area that roughly falls within present-day Nigeria [1-2]. Early agricultural group have shown up in the archaeological record around Lake Chad, with the Nok Culture, which produced terracotta figure heads, being the most well-known people associated with the period [3-4].

Expansions of Bantu people across Africa appear almost as early as the appearance of agriculture itself, around 4,000 years ago, with evidence for Bantu-related tools appear in Cameroon [5-6]. They often displaced other ethnic groups, such as the Afro-Asiatic peoples in the east and the Khoisan speakers in the South. It is thought that there may have been several waves of expansion, with an expansion around 2,000 years ago associated with the arrival of bananas and cereals across western and southern Africa [7]. Iron smelting begin appearing in association with Bantu-speaking regions around 3,000 years ago and there is archaeological evidence for furnaces appearing [8].

Bantu agriculturalists moved into East Africa during these expansions as well, where they found fertile lands in what is present-day Kenya [9]. These East African people eventually expanded south into South Africa by 300 AD [10]. There, a large kingdom developed of a people we now know as the Zulus. The Zulus are famous as the major African nation that took on the British during the colonial era, and were ultimately defeated in the 19th century [11].

The tribes of Bantu-speakers that arrived in Southern Africa in the first millennium AD eventually formed into powerful Kingdoms during the middle ages, known as the Nguni tribes. In 1709, they had formed into what was the Zulu peoples under the leadership of Zulu kaMalandela [12]. In the latter half of the 18th century, the Zulus expanded to hold territories covering a large region of the south-eastern coast of present-day South Africa, known as the Mthethwa Paramountcy, or Mthethwa Empire [13]. The Mthethwa were a confederation of tribes that traded ivory with the Portuguese [14]. They remained an independent state during British colonial expansion in the area when they consolidated under the leadership of Shaka kaSenzangakhona, who became king of the Zululands and ruled during eary 19th century [15]. The British conquered the Zulus in 1879, and this area would later become the KwaZulu-Natal province, the homeland of the Zulus during Apartheid.

The Individuals from Champagne Castle, Eland Cave, Mfongosi, and Newcastle:

The four individuals in this sample, all of whom were female, came from four separate sites in present-day South Africa, these being Champagne Castle, Eland Cabe, Mfongosi, and Newcastle. Champagne Castle and Eland Cave are located within Maloti-Drakensberg Park in the west of the Kwa-Zulu territory. The site of Mfongosi is located 48 miles (80 kilometers) from the town of Grey town in central KwaZulu-Natal. The Newcastle site is located in countryside some 42 (70 kilometers) west of the town of Newcastle, in central KwaZulu-Natal. All of these individuals were dated to between 282 and 533 years old, placing them within the early Zulu kingdoms [16].

The individual form Champagne Castle was a woman estimated to be between 20 and 30 years old. She had a fractured skull that was healing, which researchers suggest might be evidence of violence [16]. The individual from Eland Cave was a female that appeared to be buried near hunter-gatherer artifacts, as well as some iron age pottery and some rock paintings, although it was not clear if this person was connected to those finds, and the skeleton was carbon-dated to the Iron Age, which means these objects would not fit the narrative.

The individual from Mfongosi was found by a farmer in 1932, and was buried alongside pottery sherds, bone pendants and some beads. They were found to be female and the objects found were consistent with Iron Age farming cultural material. The individual from Newcastle was buried with Iron Age grinding stones and was determined to be a woman. Analysis of her bones showed that she had probably had children and was perhaps between 40 and 60 years old [16].

Genetic analysis found these individuals to belong to be closely aligned to Bantu people in other parts of Africa, and were not related to the neighbouring San people, who form a distinct branch of African peoples that split potentially several hundred thousand years ago. The Newcastle and Mfongosi individual carried a genetic variant associated with resistance to malaria [16], which remains a health problem in the region even today [17]. All of these individuals belonged to the mitochondrial lineage L. The L lineage is common among east Africans today and is associated with Bantu migrations into South Africa [18-19].