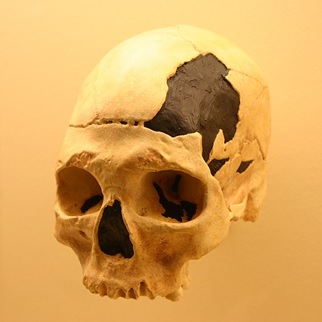 Cast of Oase 2, another human specimen found in Oase Cave [24] 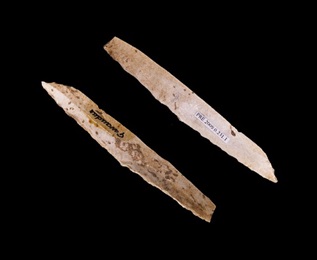 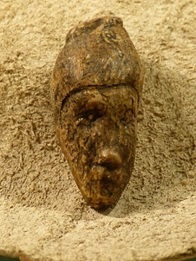 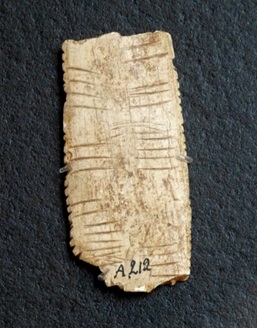 Modern humans first entered Europe during the last Ice Age, which is called the Paleolithic by archeologists, between 45,000 and 38,000 year ago [1-4]. They would have encountered a landscape that would be unrecognizable today. This was a land of wide-open tundra that was roamed by mammoths and other large ice age animals. These early groups hunted and foraged over large ranges due to the scarcity of resources and shared the landscape with Neanderthals [5], an archaic species of human which had evolved independently and had already lived in Europe for hundreds of thousands of years. It was a time before the glaciers reached their peak extent around 26,000 years ago [6-7], an event called the Last Glacial Maximum which eventually prompted these early human groups to seek refuge at the southern margins of the continent.

The stone tool technology in Europe during the Upper Paleolithic was remarkably uniform. Archaeologists have found stone blades broken off of cores that have been worked in a similar way across the continent [8], which has been interpreted to mean these people shared a common culture over much of Europe, in contrast with the diverse range of the cultures that exist there today. The period starts with an early hunter-gatherer culture called the Aurignacian from around 45,000 years ago which lasted until 30,000 years ago [9]. This was followed by the more developed Gravettian and Magdalenian cultures, which in some areas lasted another 13,000 years, while other areas began splintering off into new cultures leading into the Mesolithic.

The Aurignacian period was the very the very start of human habitation in Europe and was a time when people would have encountered Neanderthals. These two species differed in both appearance and technology. Neanderthals had lived in Europe for some 500,000 years and had become shorter and more heavily built than these modern human newcomers [10]. Archaeological sites from incoming modern humans have shown that their tools were often lighter and more diverse than their Neanderthal counterparts, but they may have learned from each other before Neanderthals eventually went extinct [11].

While the earlier part of the Paleolithic involved humans moving in and out due to the instability of the climate, the Gravettian Period was the first truly Pan-European culture and is identified by a common set of flaked stone tools and blades that have been found throughout the continent [9]. These stone tools were elongated and designed to be mounted on spears for the hunting of large game. These people were highly skilled hunter-gatherers that produced fine flaked stone blades and focused on hunting mammoths [15]. Not only was mammoth used for meat, but also as a source of material for all facets of life including the making of small buildings out of mammoth bones [16], a pattern that has been found at multiple sites in the region.

At the site of Dolní Věstonice, art objects such as carved figures and faces have been found that may have been used for magical or religious purposes. Archaeologists believe that some of the burials are those of shamans, based on the artifacts found [17-18]. There is also evidence that these people may have painted themselves with red ochre.

The Magdalenian was still a time of intense glaciation, although the climate had been slowly warming since the Last Glacial Maximum at around 26,000 years ago [5-6]. During this period hunter-gathers moved into Southwestern Europe to avoid the harsh climate of the Last Glacial Maximum, returning through Central Europe to repopulate more northerly climes [9]. Similar to the Gravettian that preceded it, the Magdalenian was also a highly unified culture over a broad expanse of territory within Europe. While the Gravettian hunters had focused on mammoth, the Magdalenian saw a shift towards a focus on hunting horses and other large game [19]. This culture produced incised bone objects that archaeologists have proposed to be some form of Paleolithic tally-sheet [20], although their purpose remains unknown.

Ancient DNA samples from the Paleolithic are quite rare but in recent years there has been a large expansion in the number of individuals successfully sequenced, with some as old as 37,000 to 42,000 [14]. Analysis of Aurignacian individuals has often focused on their relationship with Neanderthals, but by the time of the Gravettian period different regions begin to be compared. Overall, Gravettian and Magdalenian peoples were much more related to each other than modern Europeans are today. Despite this similarity, the effects of the last glacial maximum could be seen in changes among some sites. Individuals from sites of Dolní Vĕstonice I and Pavlov I in what is now the Czech Republic who were younger than the last glacial maximum were found to be a distinctly different from DNA samples dating to the Aurignacian [21]. Geneticists have found patterns of genes that follow an expansion and contraction pattern that mirrors the ice sheets. When the ice sheets reached their peak, the people of Europe had concentrated in the Franco-Cantabrian region of what is now Spain. Having lived there for several generations they had exchanged genes and spread back out across the continent when times became warmer again, changing the ratio of genes that had existed in these small populations earlier [18, 22].

The mitochondrial and Y chromosome lineages of Ice Age Europeans were remarkably uniform. In our sample of 29 individuals, there were many sites where all the individuals present belonged to the mitochondrial U haplogroup, which was the most common haplogroup among European hunter-gatherers of the Paleolithic and still exists in Europe today although at lower frequencies due to the genetic contribution of incoming European farmers [23]. Males most frequently belonged to Y chromosome haplogroup I, which is a very common lineage in European males today and is thought to have originated in Europe during the Paleolithic [18].